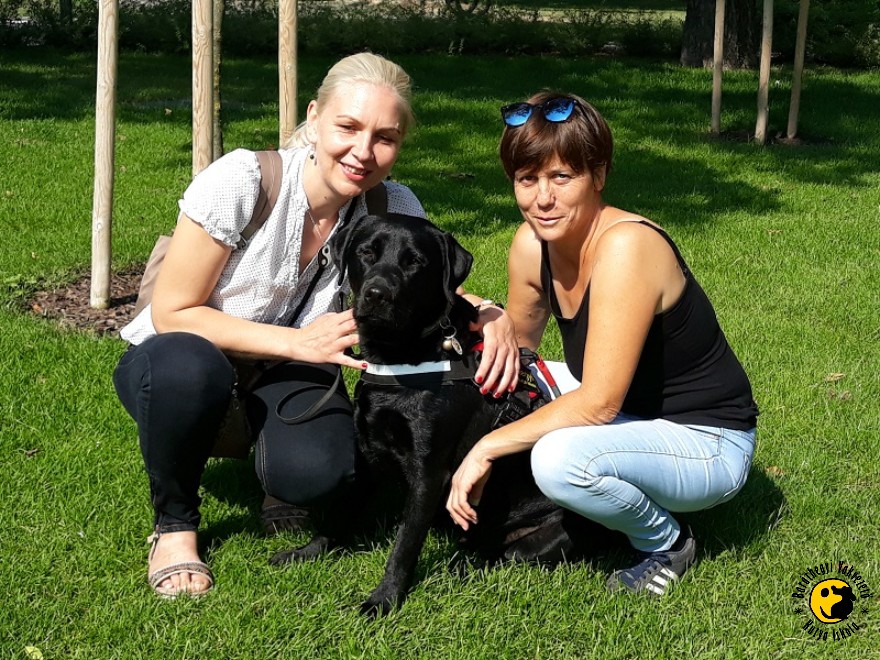 Ágnes Mészáros and Ion passed their traffic safety exam today. Ion, the black Labrador guided his owner with great confidence, paying no attention to the crowd heading to work. Ágnes and Ion were prepared for the exam by the trainer, Mária Nyíriné Kovács.

Ágnes’s jitters shook Ion’s confidence a little bit before the traffic safety exam, but the trainer, Mária Nyíriné Kovács helped Ágnes overcome her initial nervousness, so everything went as it should. “As a result of my nervousness, Ion did everything differently, but Marcsi calmed me down; she had a positive effect on me.”

During the exam, Ágnes and Ion  had a hard time, since they had to take the exam in a busy part of the city, in the morning rush hour. They took the tram, the bus and the trolleybus, then they walked from Keleti Railway Station to the University of Veterinary Medicine. Or rather, they marched, since keeping up with their fast and determined pace was not easy even for the experienced examination committee. Ágnes told us after the exam that it wasn’t their “top speed”. “Ion had a nice pace, and I forced myself not to rush,” said Ágnes with a smile on her face.

This was a route they practiced a lot. Ágnes doesn’t come here every day, but it may be useful if she has to take Ion to the vet. They were practicing this route on Monday, when as a result of an advice from a passer-by, Ágnes
and Ion almost stepped in front of a car. “We always warn the examinees to thoroughly consider advice like this, and we tell them that they shouldn’t start crossing the street, even when the light is green. We advise them to
rather wait for the light to turn green again so that they have enough time to cross,” says Mária Nyíriné Kovács.

“There was an accident on the line of tram 1, slowing down the traffic, which caused difficulty, since there was a huge crowd waiting at the stop where we got off. You had to get through that crowd, which was a nice challenge,” recalled the trainer after the exam.

We would like to congratulate the two examinees on the successful exam. We hereby thank the members of the examination committee, Darinka Farkas, Kata Rózsa and Mária Hajdú for the participation. We would also like to thank the Sápi family, especially Andrea Sápi, for their tireless work of raising Ion. They contributed greatly to the success of this exam.