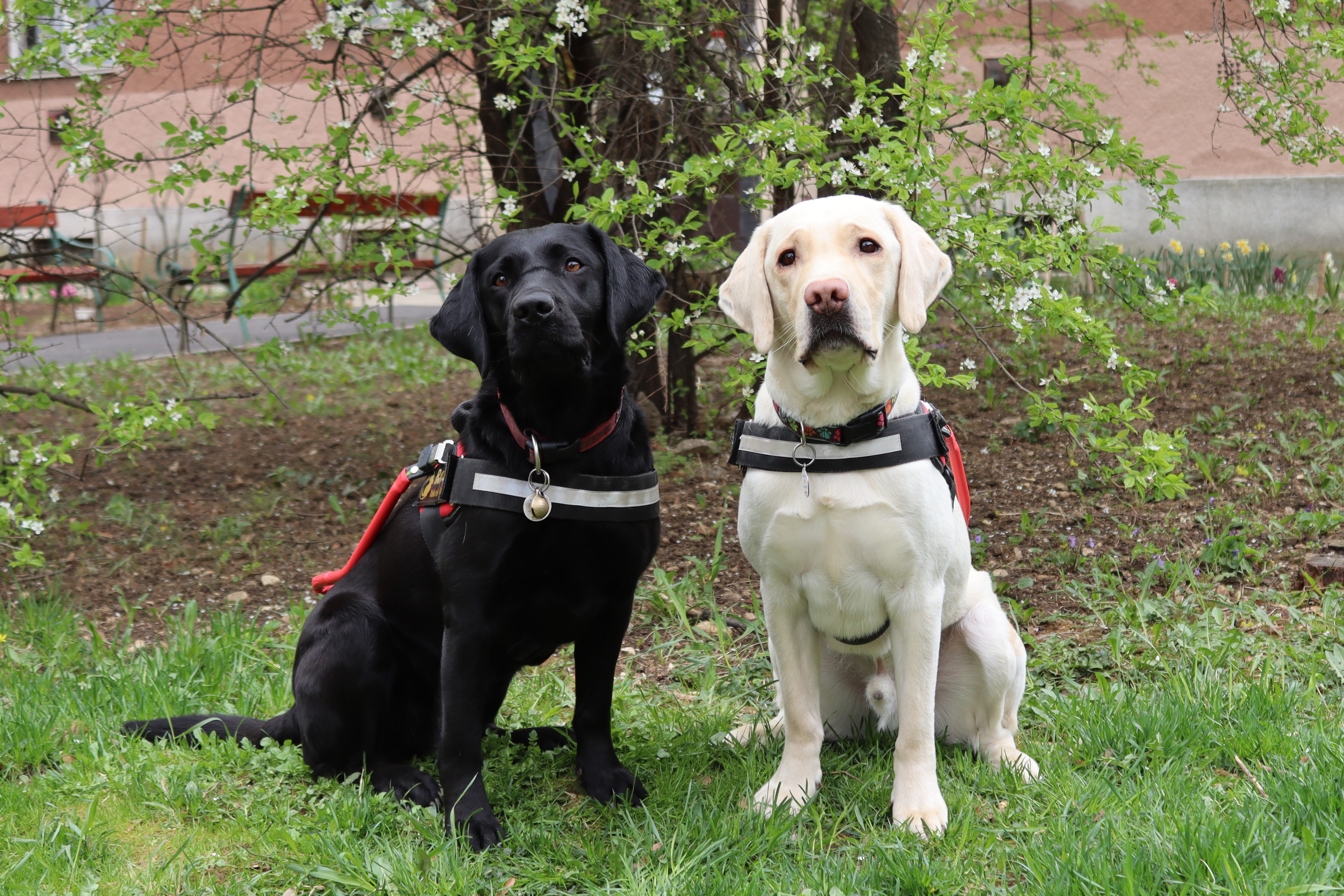 The trainers of the hungarian guide dogs:

I am a teacher. I was already giving private lessons when I myself was still a student, and up to this day I live to this passion – just in another form. I gained my education on the Kossuth Lajos Tudományegyetem (professor) and on Eötvös Loránd Tudományegyetem (rehabilitation specialist in the fields of visual impairment). I taught healthy and handicapped people, I trained finder and guide dogs as well. Now I can join all this with training guide-dogs. I am still in process of learning: profession, being humane, group work. I lead the Institution watchfully, carefully and with a big professional humbleness.

In 2011 I completed a postgraduate qualificitation of Habilitation dog trainer.

In 2012 we started the training for rescue dogs, collaborating with the Borsod Dogsport dog school from Miskolc, and we started to educate the reinforcements on rescue dogs.

My qualification is animal breeder manager. I have been surrounded by dogs since I was 13: exhibitions, hunting dogs, breeding, organising and leading dog school for beagles, but I also learned dog cosmetics, dog training, and finally I found myself working with rescue dogs. For six years I coordinated the development of 15-25 dogs of the team, and trained my own dogs. I organised numerous rescue dog exhibitions, exams and competitions, participated in real rescue and searching operations, international trainings, ambulance and volunteer fireworker courses, and worked in a paramedic car. I trained search and rescue dogs, later guide dogs with the assistance of the Foundation. Meanwhile I worked as a veterinary assistant, participating in training, ethology, veterinary assistant retraining courses, all this to do my job at a sufficent level.
During the year 2008, I visited a rehabilation teacher course, and as a result, I can work much more effectively with guide dogs.
In 2011, I succesfully finished an OKJ-course, and became a certified dog trainer.
In 2012 we launched Rescue dog training in cooperation with Borsod Dogsport dog school we launched a course on training rescue dogs in Miskolc.
(Mézes 2014, Jampi 2013, Frida 2013, Demi 2013, Miksa 2012, Mandula 2009)

Ever since my childhood I have a very strong bond with dogs: I brought home all the stray dogs from around our neighborhood. My parents had to accept that I needed a dog of my own, so I got my first dog at the age of 8. He was a caucasian mix. I started training guide dogs back in 1992 at the Dog School of Csepel, where my first dog was a lovely female labrador. One meets such a well behaved dog on rare occasions, she even helped progressing the training. I was working for the Dog School of Csepel for 6 years where I trained several dogs. I gained a lot of experience in training dogs and learnt about the needs of blind people which helped me a lot through my work. I was on maternity leave until 2007 but as I was missing dogs so much, I joined a foundation in 2008, which went bankrupt in 2010. After this I got in touch with the Baráthegy Guide Dog School Foundation which gave me the opportunity to continue training dogs that was already a very significant part of my life. I hope that our well trained dogs will help many blind people in using any ways of transportation.

I graduated with a degree in Environment Research at the University of Debrecen. For many years I was working at the town hall as an environmental administration agent. I constantly had a feeling that something was missing from my life but it took some time to realize what it actually was: dogs and to help people in need. And then I knew it! In 2009 I got in touch with a foundation that specialized in training guide dogs and since 2010 this has been my profession. Unfortunately the foundation went bankrupt but with my colleague, we were not that kind of people who give up on something. So after a few tries, we found the Baráthegy Guide Dog School Foundation, a foundation which had the –for us very important goals, moral and ideological norms. In 2011 I became a certified dog trainer. I hope to be part of this team for as long as possible and help people in need to make their lives easier.

Ever since I can remember, I’ve always loved dogs; I’ve admired their loyalty and character. I was a small child, when I got a wonderful book from my mother, Emma and me, written by Sheila Hocken, which shows incredibly vividly the unselfish and loving relationship between a guide dog and a visually impaired owner. The gripping story captivated me so much that anybody asked me afterwards what I’d like to be when I grow up, I said guide dog trainer. And so I am! After graduation, I acquired a patrol dog trainer and a habilitation dog trainer qualification. I was so lucky that after the school I was admitted to the Guide Dog School of the Hungarian Federation of the Blind and Partially Sighted, where I worked as a guide dog trainer for 12 years. This year, however, I reached a turning point in my life and I had to change, but I did not want to give up my profession. Baráthegyi Guide Dog School provided me with an opportunity that joining their team I can continue to work with these wonderful dogs, further expand my professional knowledge and help visually impaired people to give back their independence.

Like many other kids I also wanted to be a vet when I was a child. In the end, I became an animal husbandry engineer. I worked in the Veterinary Hospital in Eger and in an animal shelter in Miskolc, but Í found my real vocation here in the Baráthegyi Guide Dog School. I’m a dog training assistant: I train calm and proper behavior for dogs in the early phase of their training. I spend the entire day with them: we walk a lot in order that the dogs learn about the traffic in the city, how to travel with different means of public transportation, and meet many different kinds of people. The puppies I train can also learn as future guide dogs how to ignore cats, pigeons and other barking dogs. I know I do my job well if the dogs’ behavior is impeccable when they get to their trainer and start their special guide dog training.

I graduated in 2011 as a physiotherapist and even back then I dealt with movement development with dogs. Then I completed a habilitation dog trainer qualification and for four and a half years I worked in the children’s rehabilitation department of a county hospital, where I developed children with my own therapy dog. I consider it to be my profession to help others, so I was pleased to join the foundation to make the life of the visually impaired better by training guide dogs.