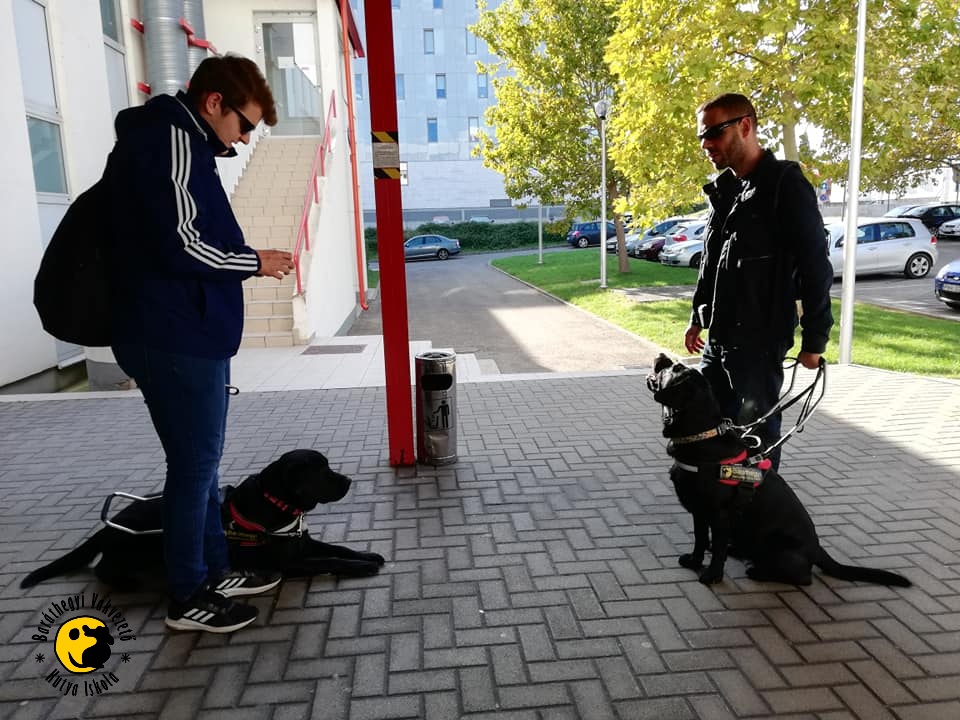 Due to the quarantine, our two pairs of partners had to wait a long time to be able to take their road safety exam. Daniel Pál and Coffee celebrated by eating steak in the evening, and Genius received a high five from his master, Daniel Sziva for guiding him in his training.

A diva does not lie down on the wet grass

Daniel Pál and Coffee took their exam first, their route leading to the dormitory where the Labrador used to play with Genius. Going there, she set such a pace that Daniel was worried whether the members of the examination committee could follow them. “I was hoping that the committee members would be able to fly, or at least have helmets for safety” Dani said with a smile, who is already accustomed to this speed.

The weather was not good for our pair, as it was raining pretty hard. “They were walking on a pedestrian street where various obstacles make it difficult for dogs to orient themselves. In this case, the dog takes it’s information from the street view, which Coffee did brilliantly, ”said our trainer, Mária Nyíriné Kovács.

Coffee is a total diva, so during the obedience task she did not want to lie down, although of course she was willing to sit and stand: “I am a Princess, therefore I shall not lie on wet grass,” joked Daniel Pál about his dog. Then there was a covered section at the end of the test route, where the black Labrador completed that task without any problems.

“Coffee met three dogs during the exam and stopped herself gracefully, she was not distracted by the dogs at all,” said Mária Nyíriné Kovács.

At the college, they met Genius completely by accident, who could not have known that their buddies had recieved this same exam route. The two dogs politely said “Hi” to each other, realizing that they were working and had no time to socialize. Coffee was taken care of in the evening, because his owner told us that they would celebrate by eating steak together. And Genius set off to take the exam with his master.

He spun around less, and deserves praise for it

Daniel Sziva says that he was not at all worried, as he is used to exam situations at University. “It motivates me to perform,” he said. Instead, he only thought about the fact that Genius is still very attached to his trainer, Mária Nyíriné Kovács, so when the black Labrador saw that his trainer was
following them he always looked back. “He’s spinning a lot less now, so he deserves an A+,” the trainer said.

The pair’s route led to the building where Dani goes to train. “They had to get on a bus, which went smoothly, and then two cars stopped on the sidewalk facing each other so the dog had to get around them carefully, luckily Dani completely left the decision to Genius, so they made no mistake. It was as if a quick “meeting had been held, ” said Mária Nyíriné Kovács with a smile.