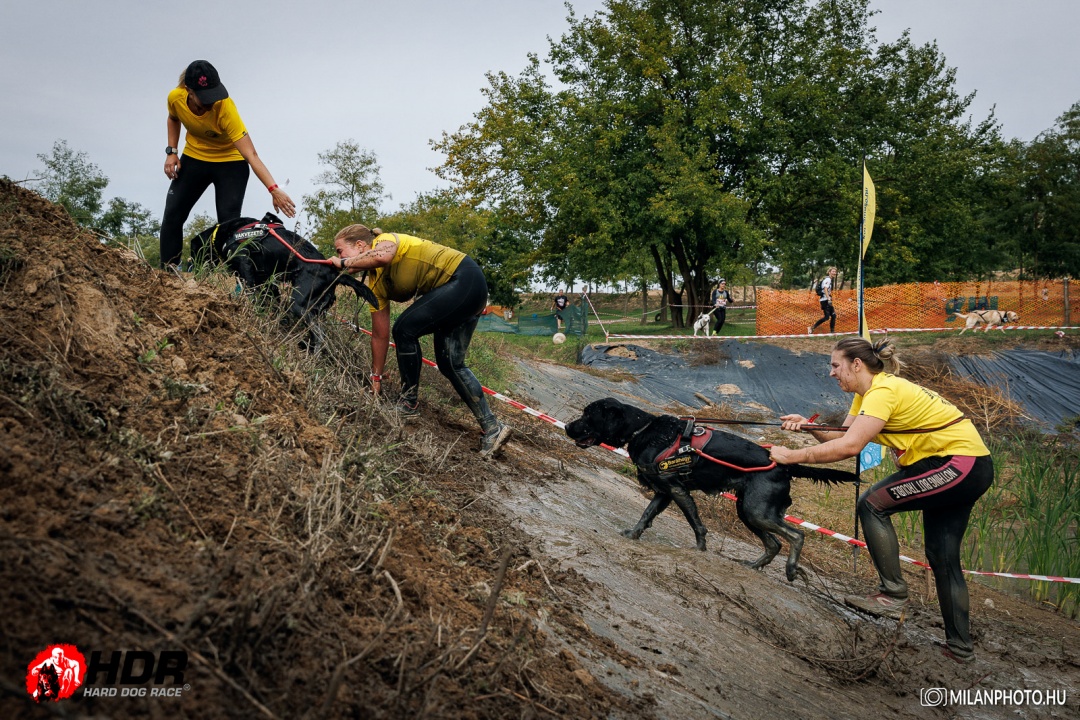 We love challenges; therefore we participated in the Hard Dog Race base competition with our visually impaired runners. We are proud of the Team of the Baráthegyi Guide-dog School for completing this difficult obstacle course.

We started to train together with our visually impaired clients and their dogs this spring. It soon turned out that we perform well. It was also motivating that we realised, so far, nobody entered the Hard Dog Race Base competition with guide dogs.
Pictures by Milán Farkas milanphoto.hu

Therefore, we decided to participate in Piliscsév with three of our clients with guide dogs and two of our trainers would escort the team all the way long.

How difficult the race was?
Zsófi Lengyel has tried herself in several sports but this time she was surprised:

”I used to do triathlon competitively, yet, this was the most exclusive and complex sport experience I gained. Moreover, it was stressful and exhausting, after all I enjoyed it so much, every minute of it was a challenge.”

”It was special for our dogs as well, as it was not an ordinary way of taking part of city

traffic, but a real adventure with the owner. The dogs understood immediately that this time their task was not to avoid obstacles but go over of them”

How the race was completed?
Our participants did not see where to step and did not have the opportunity to specify the obstacles precisely. For those who can see, must be hard to imagine how they were able to complete the 6 KM distance by running and without points of reference, on an uneven surface, by crawling-creeping, getting over of water-jumps and high obstacles. The guide dog helps during running as well and even enjoys it! Brigitta Hegedűs said that Artúr loves running meanwhile he was eager to show the ribbons bordering the running track; he helped keeping the track when she tended to loose it. They climbed up and down the great hills with common effort. Where Brigitta had difficulties to keep the pace there her dog pulled her.

Szindi Horváth said proudly that Milka wanted to get in front and he nicely showed the obstacles. She highlighted that their helpers (our trainer) continuously narrated what comes, what direction to run, where to crouch, crawl, even they put the competitors hands onto the obstacle to sense its hight. There were lot of upward tracks where an average man with dog only walks but the guide dogs proved that they can pull upwards as well and always help their owners, they also can go along carefully on the downward tracks to enable their owners to get down safely.

The greatest experience
They all bathed well in the water-jumps. They had to get through underneath the first such obstacle, therefore it was unavoidable that they all get wet. At the second one the owners had almost swim, the dogs would literally speed-up swimming as their feet could not touch the ground, furthermore it was so slippery that it was very hard to get out of the ditch.
Climbing up to a high obstacle was also challenging, as they had to climb up on a ladder without visual control. Our competitors admitted that it was scary, but they all liked it as they were able to overcome of it.

”I used to be an athlete and now I again relived this experience that I can run amongst
competitors, among those who can see, those who were taking care of us, when I did
not feel it was hindering them.”

”We were free and only running”

”Meanwhile we got fully covered with mud, and this way it was perfect.”

It was a very good feeling to move along with thousands of dog owners. Those, whom we were in one time zone when starting, showed the way to our competitors. When needed we got out of the way for those who were faster, but there were some people whom we could leave standing. The most important was that we were together and cheered for each other.
We were happy to be here together and we hope that there will be more opportunity like this.