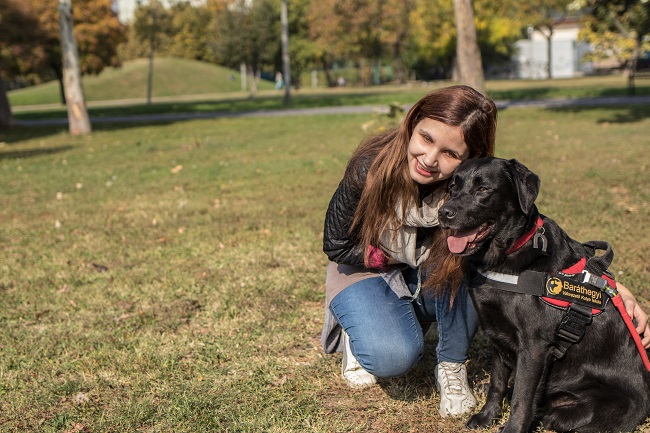 The now 28 years old Antónia Kállai, Ani, lost her sight at the age of 16 due to congenital glaucoma. Now she would say that she does not need her sight at any price. She lives a full life and is bored of stereotypes of blind people. If needed, she can also give up her seat on the bus. At first, she could not get on with her guide dog, Felhő, because, as she explains, they are both “alpha women”. Felhő taught her empathy, responsibility, trust, freedom and that teamwork needs both of them. Just like in a well-working relationship.

When did your vision become drastically worse?
When I was 12. I still learnt Braille writing and reading, I know the basic colours and I have visual experience as well. I was lucky enough to see the Eiffel Tower in Paris. Then, the world became blurry, less and less details came through until one day there weren’t any visuals anymore. I lost my sight on a Friday night but despite this when I woke up in the morning on the next day, I could see my environment, the door, the windows and the green tiles. When I was taken to a dark room for a candle test, they realized that I cannot see the candlelight. Since I spent a lot of time in the hospital, it seemed like that I still have my vision as my brain could perfectly reproduce the pictures I was used to. Thanks to phantom vision (a visual illusion when the respective brain parts responsible for the respective perceptions still function after losing the sensory organ) people with
acquired blindness can navigate better than the ones born blind. People born blind will never be able to locate themselves in the space because they lack the experience of how these spaces look like.

For instance, if you touch Felhő, do you have a dog image in your head?
It is interesting because my vision was never good enough to examine a dog in such details. When I squish Felhő’s cheeks I can feel that she has big, arched eyebrows. But what I see in front of me is that she has a cute head and three, big brows curl upwards. I imagine her with a cartoon contrast.

Do you imagine the world in caricature as well?
If I am not sure in something, yes. Or for instance, new things that did not exist before I lost my sight, like tablets. I think I would not recognise it if I ever saw one.

How did you get through losing your vision?
It wasn’t a trauma because it was gradual. I lived with it from year to year and was able to process it. The fact of losing my sight determined my life but still I did not handle it consciously. I lost my sight on Friday and went to write a history exam on Monday. I did one thing though. My mother and me went to a medical aids shop and bought a white cane. Until my maturity exam I didn’t acquiesce it but then I started to have serious sleep issues and started to descend into depression. Luckily my educator was sister Csilla who always paid attention to her students. She advised me to go on a German exchange program with the Charity Service of the Order of Malta.
There I found a friend, Stephan, and we were squeaky laughing on the fact that he does not have arms, I am blind and what funny situations can arise from that. I learnt a lot from him.

For instance?
For instance that I cannot run from arguments because I cannot find the door. Or how I can emphasize my words without looking into someone’s eyes or making gestures. How to believe to be confident without being able to locate myself and the other people in a space. How I can ask for a napkin with dignity if I spill a glass of water. I was able to handle these by the age of 24-25 in a way that today I can say with confidence that I don’t need to see at any price.

Your brother, Kristóf, inherited the condition as well. Were you able to help him process it? How is your relationship?
We already knew what would happen to him, so when he was 6, he started going to the same college I went to. I was 12 at the time and we were living together, I was going to parent gatherings, I spoke with his teachers and I looked after him when he moved in. Just as for me, it was hard for him as well to process what was happening. The difference is that I had to be strong because I knew that my mother has to live through this once again with my brother and I did not want Kristóf to see how hard it is and that it takes a toll on the person. I couldn’t burst into tears that yesterday I still saw the window and the next day I couldn’t. I held it all in to protect him from the situation Today we can talk a lot about how he lives it through, and he started to be open about the topic with dignity, He is everything for me, we have a really close relationship. Actually, I can thank Felhő to him.

How so?
I was planning my wedding 2 years ago when he said he needed a guide dog. He attended a sympathy meeting at Baráthegyi Guide Dog School then he called me that there was a dog named Felhő. Even though this was far from me and I had problems with dogs as well, at that moment I liked her name so much that I decided that I need that dog. I did not even give my application. It was obvious that Kristóf and Felhő will not match because Felhő is really leisurely lady. That is why she got the name Felhő (meaning Cloud in Hungarian). With a bit of exaggeration, she moves when the wind blows. However, her slowness and consideration are just a perfect match with my high heels.

How did you find each other?
When it became obvious that Kristóf and Felhő will not match, I handed in my application and 2 weeks later I met with Felhő. It was love at first sight even though Felhő had 8-10 sympathy meetings before but was never willing to complete the task or just pulled the person through the city. With me he gave exact warnings, for example when we got to descending stairs, she sat down in a way that I would surely notice. After completing the task, he did not look at Mária Kovács Nyíriné (Marcsi), her trainer, but she looked at me. Marcsi already know that we were a match.

What was it like to trust her on leading you?
I hardly trust anything or anyone and I would have never thought that dogs can help, pay attention and love this much. When we moved to the capital, there was a construction on the street of my workplace, and we had to walk among big machines during rush time. Despite this, I got to work every morning with Felhő who even had the capacity to help my blind colleague and by-pass the obstacles on the street. Felhő led us through such passages where even the otherwise cold-blooded trainer’s pulse rises. From then I was sure that this dog would do anything for me, which surpasses my imagination. I couldn’t walk in the city in high heels with coffee in my hands, if I had a white crane. With Felhő, all this is possible. From here it is easy to forget that this is a teamwork and we might end up with over-reliance. However, even Felhő has bad days for instance when she stops at the middle of a crossing and is not willing to move. This whole trust game is like with men – he loves me and would do anything for me, but the relationship needs both of us.

With men it is hard to find the perfect balance like what and how much you can do for the other and what the limit is? Do you always choose partners with sight? What effect does it have on the balance that you cannot see?
3 years ago I would have immediately said that it does not have an effect but now I can see that there are certain things I cannot do without my boyfriend. It’s not that I would never be able to do it in my life but because I need time to learn things. For example, until I feel comfortable in the kitchen, 2 square-meters are enough for me to get lost. Any man has to take extra miles in the beginning. I also have to be careful not to swing to the other extreme and have myself served and let others do my tasks. One has to pay attention to this balance in such a mixed relationship.

Has this ever caused any difficulty?
It was definitely a problem with my ex-husband, with whom we were together for 3 years and divorced a year before last December. Once I was going home from work at two a.m. and my crane got stuck in crack on the pavement. I called that I was in the middle of Újpest and I didn’t know how I got stuck. He told me to stand there and he would come for me after he smoked a cigarette. It might sound rude, but I can understand that people reach that level when one just gets tired in all of this. He is kind of an artist which demands that his partner is there for him non-stop. I felt this especially after Felhő arrived and I had less time for my husband. I don’t want to suggest that one cannot live a full relationship with a guide dog. However, it is a fact that a guide dog arriving to the family comes with almost the same hormone rush as having a baby. I was 26 at that time, the age when a woman really wants a baby. Instead of a baby, I got Felhő. I suppose I did not handle the situation as I should have had but my ex-husband should have been more patient as well.

What is the most important in a man?
I am just the opposite of the normal: first I notice the inner traits. So, you cannot be fooled with masculinity… Not really, but stubble or beard is an important aspect, as well his smell and that I feel good in high heels next to him. For me as a woman, it is important to be his princess because he sees me that way and not because I am blind and need his help.