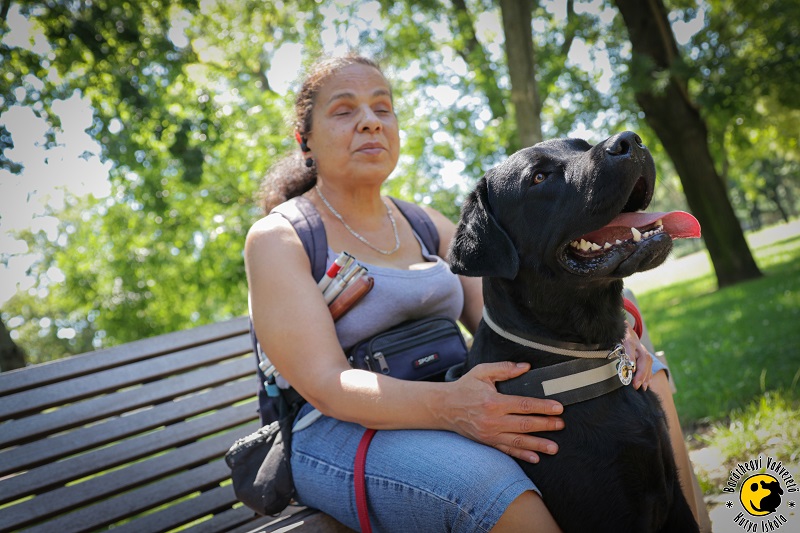 Kontra the black labrador has been training with her owner, Aniko for months. The pair are great match as they are both very sensitive. Kontra is not Aniko ‘s first guide dog, but they were almost immediately on the same wavelength. Anikó and Kontra are both excited about their road safety
exam.

Kontra and Anikó met in May, and the first meeting was very successful.
“I first met Kontra in May, we were walking around my home and she was already sympathetic to me. I am very glad that I got Kontra, ”said Anikó with a smile on her face.

The couple do almost everything together, they go to Anikó’s workplace every day and everyone there really fell in love with the black labrador. According to Anikó, Kontra is a real partner in everything. “It’s wonderfull to walk, play and work with her.”

They get up at 4 every day so Kontra can walk and have a little time to run and exercize. After completing their morning routine they leave for Anikó’s workplace at quarter past 5. They work until 11 in the morning, Kontra even accompanies her beloved mistress for a coffee break. After work they
complete their daily tasks, such as shopping, going to the post office and the pharmacy.

The afternoons are about Kontra, this is when she takes him for a walk him and plays ball with him.

Anikó’s partner also fell in love with this beautiful dog, so they pamper her together in the afternoon.

Anikó’s previous dog was also a “Baráthegyi” dog, Mandula was her companion for 13 years. “Every dog ​​is different, so Kontra is a complete new personality compared to Mandula. He is a very compassionate, kind, conscientious and sensitive dog. He is always in a similar mood to my own.”

Anikó and Kontra are excited about their road safety exam, which will take place next week. Darinka Farkas was the dog’s trainer so we also asked her how she sees the new couple.

“He is a very sensitive, intelligent dog. He likes to meet new people, he likes to work, he is very attentive to his mistress. I could see that they bonded from the first moment. Anikó is also a more sensitive soul, like Kontra, so they understand each other very well. They know each other’s difficulties and shortcomings and they compensate for them, so they form a whole together. ”

We thank our puppy trainers Szilvia Török and her husband, Peter, for raising such a superb dog for us.