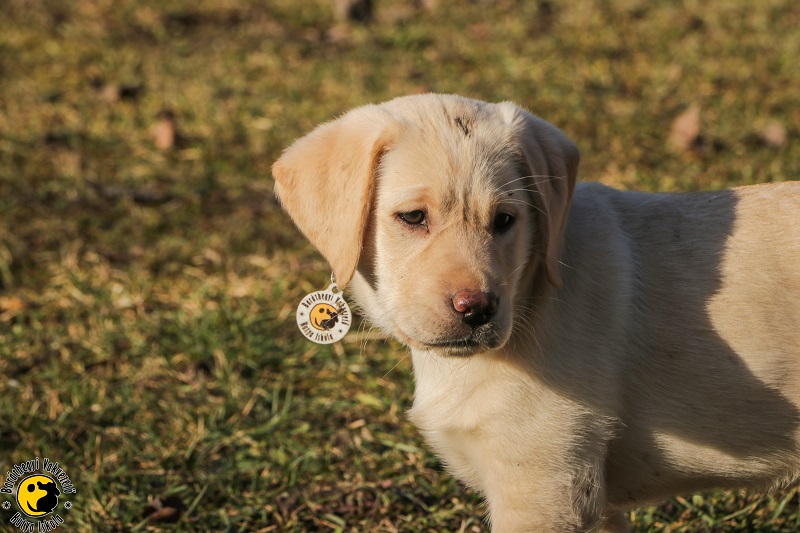 Orkán, Olivér, Óda and their siblings have left their mothers’ house and moved to puppy trainers. They will all learn the basics that will be important in their education with super families. In this article you will be introduced to the beautiful yellow Labradors.

Olivér is a very brave guy, so luckily he wasn’t scared by the New Year’s fireworks, he slept peacefully with his new family. Olivér will be raised by Zsuzsa and her daughter, Emese, who told us that the puppy was already integrated into their family. They have an old dog, Dió, and Olivér will learn a lot from him to become a real gentleman. According to Zsuzsa, the little yellow labrador is really cheeky, but it’s manageable. He pays attention to his puppy trainers if his name is spoken, he can be called to heel most of the time, which is a great achievement at such a young age. Oliver loves kids and will soon visit his trainer’s workplace.

Ostya, the beautiful little girl, brought her little suitcase to Kriszti and Márton. She sleeps peacefully every night and spends her days exploring the world. Her latest big adventure was the January Puppy Meeting where she played with her siblings, the M and N litter, and some of our trained puppies. At the puppy meeting, Marci told those interested in puppy training that Ostya’s arrival was a miracle for him and his partner. The little one is very human-centered, gets along well, and is interested in everything. They have already been shopping with her and took her with them to a restaurant … she was calm and relaxed everywhere. She lay nicely beside her owners’ feet, she didn’t jump, she didn’t whine, they are very proud of her.

Origó is happy to make friends with dogs and people, and enthusiastically enbraces every adventure. Almost nothing frightens him, he has even tried skateboarding. He walks on a leash in accordance with his age, often recognizes his name and rushes to his trainer, Nóra. He’s been to a restaurant, a gym, a supermarket and on a bus. He relaxes after these adventures with lots of sleep.

Szucs Marika is raising her third puppy for us. Her first puppy, Icon, is already assisting his owner as a guide dog. Arthur is being trained by our trainer, Lajos Cserven, who will teach him everything that will make the life of a visually impaired person easier. After two boys, a little girl named Oda has now been assigned to Marika. This lovely couple have tried the puller in the past few days, practiced walking on a leash and got to know other dogs. Marika was asked what life with a little girl dog was like. Laughing, she replied that Oda was up to six boys at a time. She changes from little angel to devil from one second to the next and vice versa. As her name suggests it, she responds to everything faithfully, and always has something to say. Of course, in common with her predecessors, Oda also keeps a journal. We quote from this: “I love my foster mother and home alike, but I don’t yet understand exactly what it means to be a fairy/angel and a devil. I’ll tell you when I figure it out.”

Omega did garden work the other day, then got to know the broom, but finally the job ended up as the human’s work. Miklós Maróthy has already raised five of our puppies, most recently Alma, the beautiful black labrador who is now studying with our trainer, Emese Királyné Barkóczi. Maróthy gave himself little relaxation before he took the next puppy, Omega, under his wings. Omega is a great puppy, helping his foster parents around the house. The other day they did gardening work together with Miklós, and later he became acquainted with the broom he was trying to use alone, but eventually the bipeds did the sweeping. The members of the O-litter have now become house trained, thanks to Gizella Ménesi, who brought up the little ones from a very young age. According to Miklós, Omega is a medium calm dog, and maintains a good relationship with their cat and elderly doggy. She tried to chew on the furniture, but after a few “nos” she soon stopped this activity.

Interestingly, all of our A-dog foster trainers have also chosen a puppy from the O-litter. So after three black siblings, they are now raising three yellow ones. Okker moved to Szilvi’s family, formerly Afra’s foster parents. Well … puppy rearing is very addictive.

Our Oxygen is a very lucky puppy, because she will play with many kids in her new home. The little yellow Labrador will enjoy the hospitality of the Palicz family until about the age of one year, when she will go to train and learn what a guide dog needs to know.

“Ozone held an exam for students, but fortunately he wasn’t too strict.” Ozone moved out of the family nest and spent the first night quietly sleeping in his new home, the Anna’s. He has fit in nicely since then. He and his foster parents went to a pharmacy where he waited patiently. Anna says Ozone loves people so much, he demands hugs from everyone. His main feature is that he is very cute – says the puppy’s carer with a smile. Ozone lives a very adventurous life, has already tried BKV buses, driven several times with his carer and has been to a fish restaurant in Szeged. Since Anna teaches at the University of Veterinary Science, Ozone had the opportunity to hold an exam for students, but fortunately he wasn’t too strict. The puppy will continue to visit his owner’s workplace often.

Octav will spend the next year with Edina and her family, and looks forward to the second puppy meeting of his life, where he can meet his siblings and older dogs again.

Puppy Orion has moved into the home of Victoria and Tamás where he will start learning the basics, but in the meantime he has to play a lot, make friends, stroll, and explore the world.