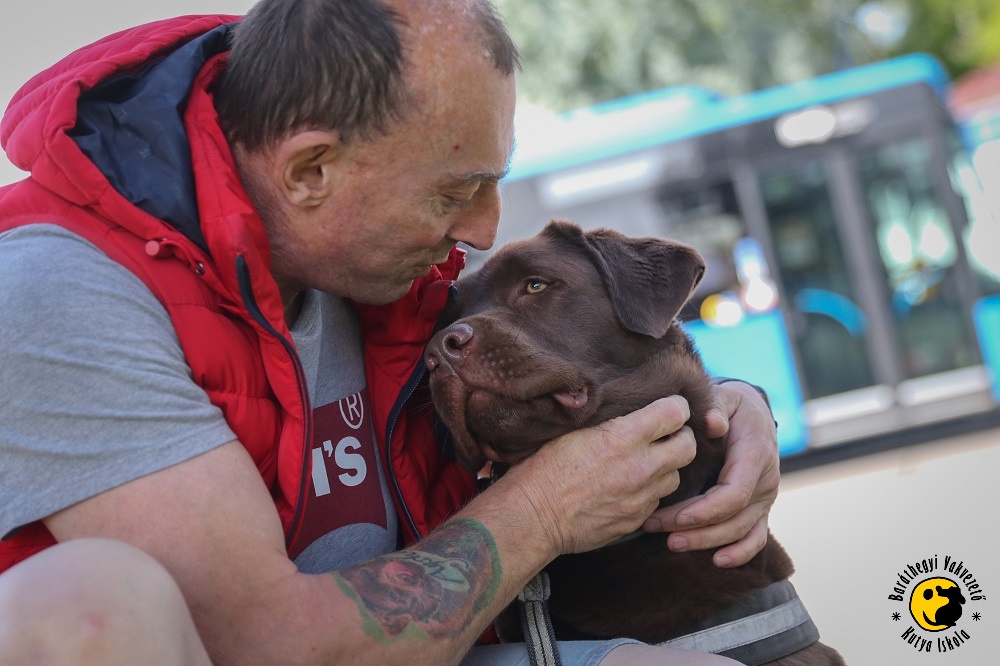 The Court found in favour of Attila Samu was told by both a fellow passenger and the bus driver to get up from the priority seat on the bus. The Court ordered BKV to pay a recompense of HUF 100 000 to him.

It all started as a normal day, with Attila Samu getting on the bus 85E at the Örs vezér tér terminal. His guide dog Aysha found the priority seat and Mr. Samu readily took it. The dog, trained to do so, crawled under the seat. For the rest, we quote the related post from Mr. Samu’s social media page.

A few minutes later, a couple got on the bus and started to yell at me in a particularly appalling style, claiming I had no right to sit there. I replied I did have the right indeed, travelling with a guide dog. They could have fit their pram right by my seat, no problem. Yet the lady kept on arguing, wanting me to stand up so that she could sit down. As I was not willing to comply, the bus driver also started shouting, in a not less appalling manner that he would not start the bus until I gave her my seat. He even stopped the engine. I told him to call the police, or else I would call 112. As he did not make the call, I did. The driver in the meantime called Dispatch and then ordered everybody off, claiming the bus had to go out of service.

It all happened in September 2018. Afterwards, Mr. Samu visited the customer service of BKK in Kőbánya-Kispest and filed a complaint against the driver, but to no avail. He was thus forced to take matters in his own hands and sued BKV in court.

“I won the case on appeal in April 2021. BKV was ordered by the Court to pay 100 000 forints for me as recompense. I cannot understand what took them so long?” Mr. Samu wonders.

The problem in this particular case must have been the ignorance of both the passengers and the bus driver, as they were not aware that the visually impaired travelling with a guide dog are entitled to protection by law when using public transport. Unfortunately, the visually impaired often fail when trying to stand up for their rights, referring to this legislation. Obviously, they do not have extra rights, nevertheless they are entitled to the same as anybody else. The priority seat, the subject of the dispute, is a service rightfully claimed by travellers with special needs, whether they are visually impaired travelling with guide dogs, mothers with babies or wheelchair users.

We asked the Chairman of our Board of Trustees to clarify the situation, being someone who has experience both as a rehabilitation trainer and a guide dog trainer. “When Attila stood up for his rights, it was not an act of selfishness. It would have been unjust of him, anyways, trying to stand up against a mother with a baby. However, he is visually impaired, hence he does not have the capacity to make accurate observations. He was rightfully anxious about his guide dog that she might get trod on by the crowd. Accordingly, he sent Aysha under the priority seat, as he was taught in the school, so that he did not have to worry about her safety. He could not stand up from the seat and give it to the lady while the dog lay underneath as it would have meant leaving the dog alone and Attila could not have found his way on the bus without the assistance of Aysha anyways.

It was a typical case of circular logic, ending up in a law suit which did not please Attila at all, as he did nothing illegal” Dr. Tamás Mezősi sums up the situation.

According to the expert, it is important to ensure that neither mothers with babies nor the visually impaired travelling with guide dogs nor wheelchair users suffer disadvantage when they otherwise comply with the rules. As Dr. Mezősi points out, the experience of our Foundation with this matter has been largely positive. In the majority of cases, the parties will be able to connect with each other when using public transport together.