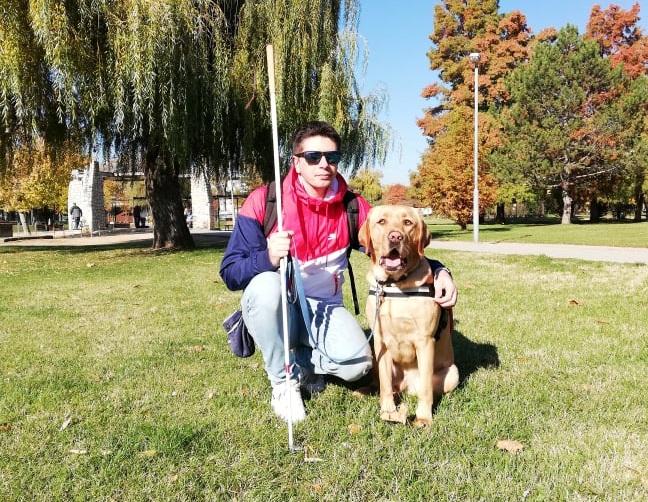 Our couple passed the traffic safety exam in Székesfehérvár today.

Attila Bodnár moved to Fehérvár at the end of the summer, meaning he was trained to practice with a “new” guide dog in a new town.

“I consider it a great success that they have been honed in a short time. On the steps of Parfé, I see you taking care of your master. There is a bond that he is worried about, taking care of. Attila is a maximalist, so Parfé is a good partner for him. He was one of the most diligent students of our school,” said Mária Nyíriné Kovács, Parfé’s trainer.

Our dog loves to perform tasks, his puppy, Márta Vucseta, taught him a lot of tricks. It is also notable because it recognizes many objects by name, and their owner takes them there on request. According to our trainer, it was possible to build well on this learning, making it easier to train Parfé.

“Parfé is very clever, and I noticed that he was planning where he would go from the front of the zebra. There was a striped sidewalk section in the exam, and this unexpected situation was easily resolved together,” said Mary.

They also passed a lake during the exam, which requires a lot of discipline from a water dog to ignore. Parfé also stood here.

Attila comes and goes a lot in several cities and reported that Parfe had enough to show him a route twice to learn. He also has outstanding capabilities in this regard. Moreover, he invented himself so skillfully that he has already taken Attila out of unknown streets.

Parfé is the perfect fit for such an active, fantastic host. We see that our dog and his owner can get the most out of each other, which is great happiness. We wish them many happy years together!

We thank Márta Vucseta and Csaba Pusztai for raising such an excellent dog. We would like to thank Mária Nyíriné Kovács for her training and work in the examination committee for Zsóka Bernáth, Kata Rózsa and Darinka Farkas, representing our foundation.