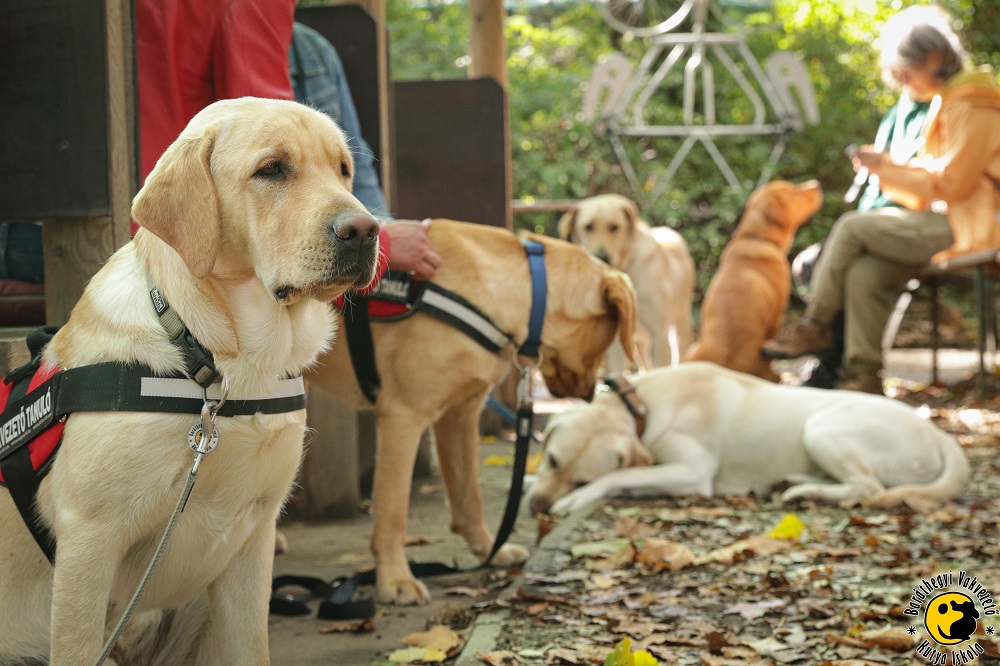 This October at our puppy meeting, we organized a slightly different program for our growing dogs and their owners and visited an outdoor foodcourt on the banks of the Danube. Would you really believe it if we told you that the labradors left with empty stomachs?

Once again, the puppy meeting started with a big race about. We arrived on the island with our dogs. The Labradors are almost one year old, so they are already familiar with many basic tasks.

We practiced calling the dogs to heel while walking, as the other puppies hiking in the park were exciting challenges for them. They are well behaved and trained, so they always came back nicely to the caller for a reward treat, cuddle and praise.

After the racing slowed, we went to the Roman shore. Here we sat down in the garden of one of the local restaurants to talk and, of course, to practice.
On the banks of the Danube, what else can one eat other than Hungarian classics? The mixture of these smells are a huge temptaiton for Labradors who like their bellys a little too much, but it is very important that they remain disciplined even in situations like this because in the future if they go in for a coffee with their visually impaired owners, they should stay calm there.

“The best guide dog is invisible. The type with whom if the owner goes into a theatrical performance or a restaurant the other guests don’t even notice he’s there. However, it is important not to pet a dog resting next to its owner, as they are performing a task. They need to focus on staying calm, and we can upset them by going there to hug them,” said Piroska Komondi, the head of the Baráthegyi Guide Dog School.

While the owners ate, it was Oliver, Rege, Oktáv, Orion, and their siblings whose job it was to lie still.

“Behavior at the table, like so much of everything else, is actually a habit. From a young age, a child is used to the fact that when people eat, he shouldn’t leave the table, and better yet he should stay in his place. This can be reinforced mostly by operative behavior shaping, the point being that leaving is never rewarded, so after a while there is no point in trying, ”says our professional leader, Komondi Piroska.

Indifference to food is a difficult task for a dog, but a guidedog must learn it at an early age in order for his visually impaired owner to enter friend and family gatherings, a canteen or restaurant near his workplace with complete peace of mind. Their good behavior is once again praised, and a delicious bite of their food is given as a reward.