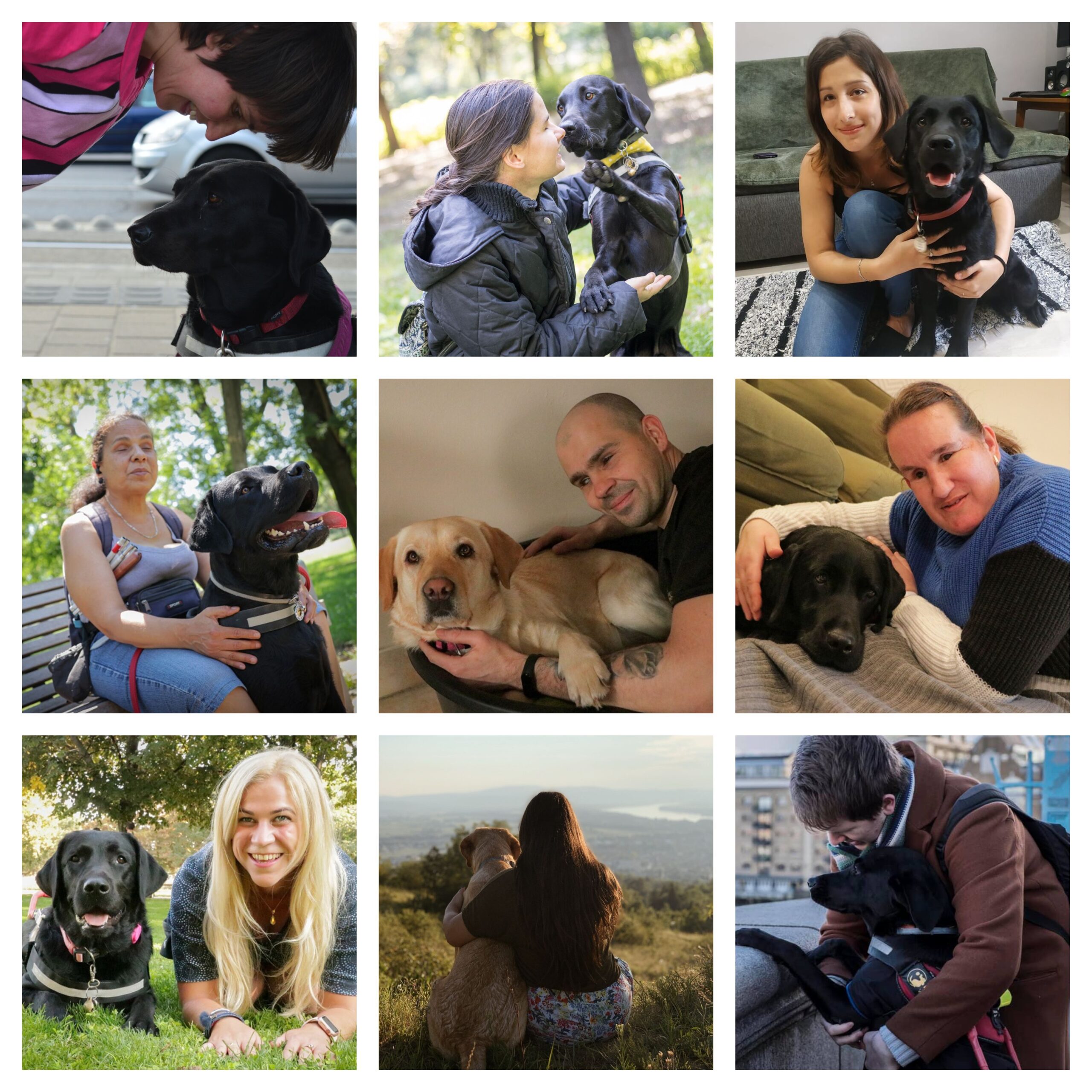 October is Vision Month, October 8 is World Vision Day, so we gathered the thoughts of some of our visually impaired friends about how their guide dog changed their lives. The dogs of the Baráthegyi Guide Dog School help their owners to travel independently and feel safe and give them a lot of joy, so we can say that we are raising the world of the eyes of visually impaired people.

With a guide dog, nothing is impossible

Körte, the “blonde princess” as Misi calls her, moved in with Mihály Dombai last winter. Due to the coronavirus epidemic, their exam slipped a bit, but they passed successfully in June. They live an amazing couple, a very active life. Mihály has several hobbies, so it’s not uncommon for them to board a SUP or sit in a canoe or dragon boat. Sitting in a dragon boat as a visually impaired person and performing similarly to, and often better than, their
visionary competitors may seem incredible at first glance, though it isn’t. Of course, his teammates who see Misi also take part in this, fighting for the lead in a team.

Pesa Anna Maria and Hablaty’s relationship is based on love and security. “After using the white stick, a new world opened up for me with Habi. I moved to Debrecen and Habi knows and does her job fantastically even in a place that is foreign to us. I feel safe with it, ”he says.

The white stick is not smart, the guide dog is
László Bábel went to college or university with any of his guide dogs, and the guide dog always helped to overcome the initial difficulties. He had many friends he could owe to his dog. “The dog is incredibly helpful in making the connection. With a white stick, they won’t tell you how smart or how much your stick is watching you. This happens automatically in the
case of a guide dog, ”says László Bábel, who travels with the Marzipan received from the Baráthegy Guide Dog School.

According to László Bábel, living with a guide dog is easier in many respects, but more difficult in other respects. It is up to everyone to decide how much they can accept. It must be taken into account that he is also a sentient being who has feelings, moods, independent thoughts.

László explained that a person gets into a lot of pleasant and unpleasant situations, which he would avoid without a dog. “I think the desire for a guide dog should come from within. The problems will not be avoided yet, but at least you will have an inner hold to endure them. I’ve also heard the belief that a dog will cost at least a million and a half in a lifetime. If you have this, learn to drive safely with a stick. If someone isn’t bothered by the current challenges and dares to face unexpected adventures, events for eight to ten years while a dog is with him, plus he loves animals, cut into it. No one can promise him that his life will be easy or simple under the influence of a guide dog, but it is sure to change radically! ” – says László Bábel.

Dolly has been a part of Sáfrányné Kobli Irisz’s everyday life in Győr for a little over a year. By now they are very polished, the black labrador always accompanies them to work, and in the meantime, they have many adventures. “It feels good to experience that a kind and a helpful person comes every day, even if I don’t ask. We went to work with Dolly the other
day. We just got on the bus and settled down when I noticed someone stopping next to me and saying, “Where you used to get off, I can’t get to the stop because they’re still doing it and there’s a big hole there, but as far as I know, it’s close I stand on the sidewalk. ” That was the bus driver, says Iris.

Two black labradors took Pécs
Géniusz and Kávé grew up at the Baráthegyi Guide Dog School, and then they both moved to Pécs. Their owners got to know each other during the dog adventures. Daniel Sziva and Genius and Daniel Paul and Coffee have been in contact ever since. The two black labradors are happy to band together, and the two Daniels can exchange experiences about dog life.
“At the beginning of February, the trainer of the foundation brought two dogs to Pécs, Kávé, and Génius, so I got to know Genius’ owner, Sziva Dani, with whom we have been in contact since then, even though he moved temporarily from Pécs, where he was a colleague.

Sometimes we talk on the phone and discuss our experiences with dogs, we draw ideas from each other, ”says Dániel Pál.

For Pál Dániel, the arrival of Coffee, the black labyrinth, meant a lot of relief for transport lawyers. But he doesn’t feel like he was positively discriminated against in some situations because of that, and he thinks that’s right.

“Dog life has many benefits in many situations. Especially if I want to make friends. The dog is a very big advantage in this situation because people love those who have some kind of animal, ”says Dániel Sziva.

Daniel Sziva, if he could, would change the world so much that “people would pay more attention to each other and not only everyone would be staring at their phone, or, not just each other, they would pay more attention to everything. To their environment, to the way, the wind blows, to birds. Be more aware of how many beautiful things there are in the world and not just see the bad. ”