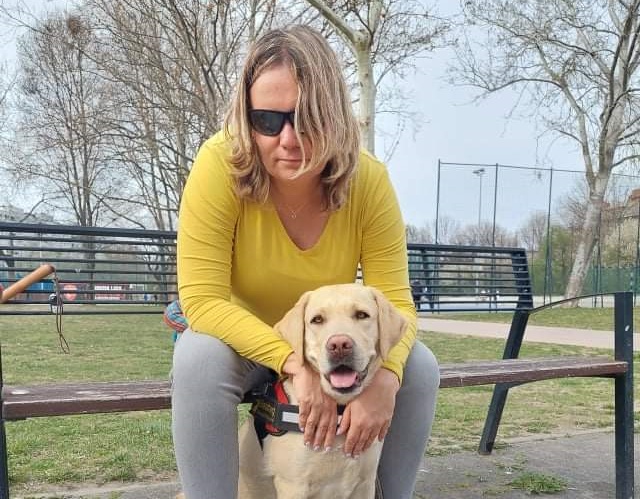 Rozé and her visually impaired owner Ivett have successfully passed the road safety test and are now ready to start their new independent life together.

Monday morning was damp and grey. We were hoping to avoid a massive downpour of rain. Rozé, the yellow labrador has been feeling her owner’s nervous tension since Sunday night. Ivett was anxious and her dog could tell. Something important was happening.

On Monday, Ivett took the dog out for a walk early in the morning as usual. Rozé enjoys long walks in the park, getting lost following her nose. Once finished with her usual route, she stood next to Ivett as if to say: I am ready, I am ready to guide you! Once back home, there was a bit more time to chew the wild boar squeaky toy before heading out for the big exam.

As soon as the examination officers arrived, Rozé put her favourite toy down and was dressed in her red guide dog harness. It was time for the road safety exam!

Ivett and Rozé have practised the usual route several times before. However, today they were a little bit nervous as they now had to prove to the examination board that they are ready to independently face the Monday morning rush hour.

Rozé was guiding her owner with great confidence. Nothing could distract her: she carried on walking despite the other dogs on the street. She also managed to get on a very crowded bus, keeping her owner safe. Rozé had successfully crossed many roads, travelled on an elevator and the metro as well before arriving at their destination, Ivett’s place of work. This is where the exam has ended.

Let us congratulate the pair on their successful road safety exam!

We would also like to thank Rozé’s trainer, Maria Kovacs Nyirine and our volunteeers, Fanni Fazekas and Daniel Benyi who looked after Rose as a puppy. By volunteering as a puppy host family, people like Fanni and Daniel make a really valuable contribution to our work of training guide dogs for the blind.

We would also like to thank Kata Rozsa, Krisztina Gazso and Darinka Farkas for their work as members of the examination board.