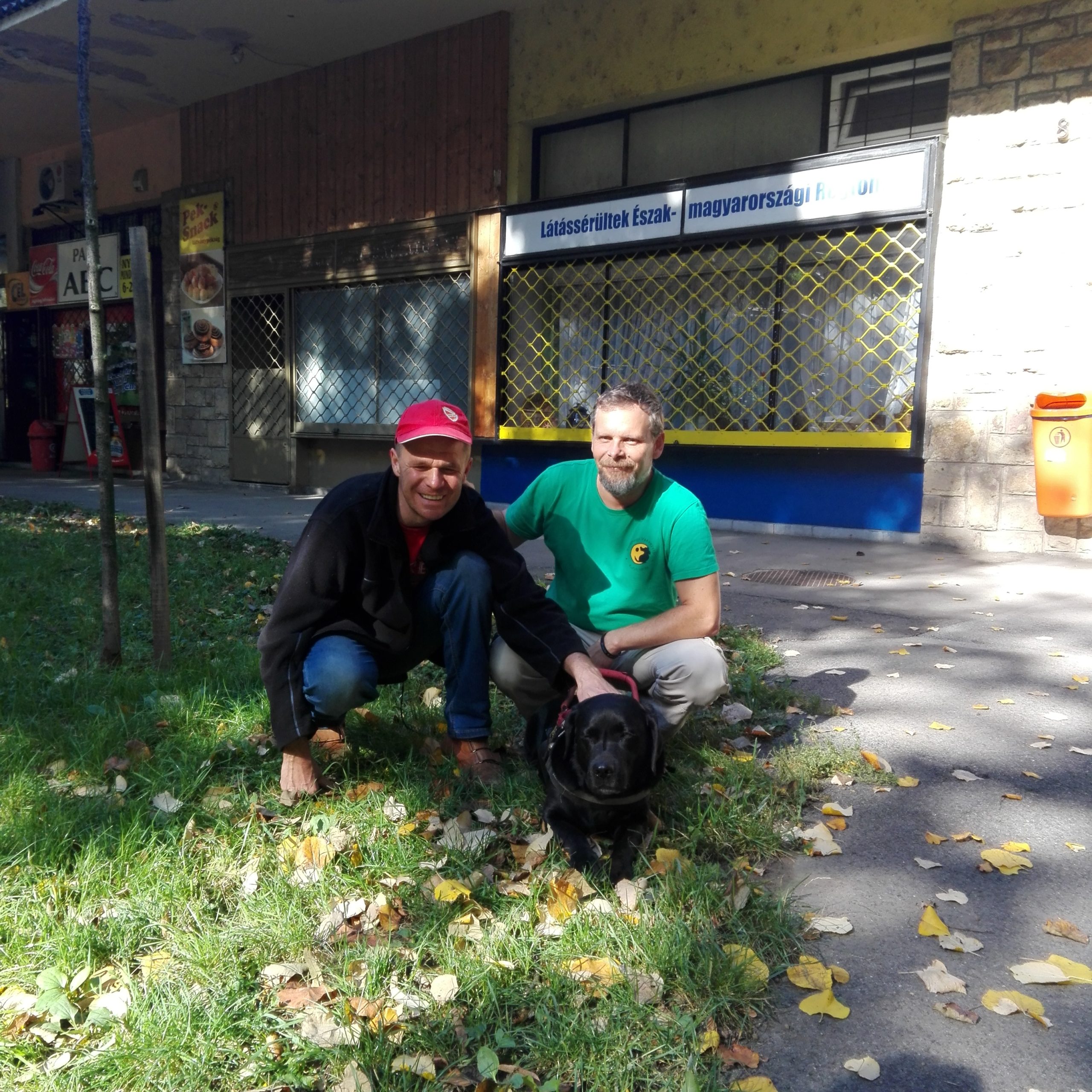 Laszlo Bokros and his guide dog Felho (Cloud) have been preparing for the road safety exam since April. They successfully passed the exam last week. It was obvious from the moment they met that they would make a good team together.

László’s eyesight has been deteriorating since he was 5 years old. He attended a main-stream primary school with sighted children and got a degree in horticulture studies in 1996 in Velence, also from a school for sighted students. “A few years later, in 2000, I was declared blind, and moved to Budapest and joined VERCS, a rehabilitation group for blind people,” Laszlo said. “Here they taught me how to use the white cane and I even picked up a few tricks in the kitchen.”

“In December 2015, I met my partner Zsuzsa, and we both enjoyed being out and about in nature,” Laszlo said. “In 2016, I came across the charity Latas-Mod and its president, Ildiko Weisz. From her, I learnt how to use the public transport in Miskolc.” Laszlo currently works for a chairty called Buzavirag.

Laszlo’s guide dog Felho was trained by Maria Nyirine Kovacs. Felho, a black labrador, first started her carrier as a guide dog with another blind person, but their partnership came to an end recently. So the guide dog charity Barathegyi was looking for another owner for Felho. And they have found Laszlo. “Laci needed a dog who can walk really slowly and has a lot of patience,” said dog handler Lajos Cserven. “Felho, who is 4-5 years old labrador is just the dog for him. I have never seen a calmer dog than her. You can fire a cannonball next to her and she wouldn’t even blink,” said Lajos who helped the pair to get ready for their exam.

According to Lajos, one could tell straight away that Laszlo and Felho will be a match made in heaven. It has been a long process for them to get to know each other, but now they can travel around Miskolc completely on their own. Laszlo, with Felho’s help can also commute to Vámosújfalu, where he works. This is a great improvement in Laszlo’s independence as he used to have to ask somebody to travel with him to work and now he can do it with the help of his dog. Felho is Laszlo’s first dog, so he had to learn everything about being a responsible dog owner as well. He has completely fallen in love with Felho during the training, and they passed the exam with a great success: the examination officer praised their achievement.

We would like to congratulate the pair for their successful road safety exam. Felho’s trainer was Maria Nyirine Kovacs, and it was Lajos Cserven who helped Laszlo and Felho get ready for this second exam. Tamas Mezosi and Emese Kiralyne Barkoczi also contributed to the success of the pair in passing their exam. We wish Laszlo and Felho many happy years together!