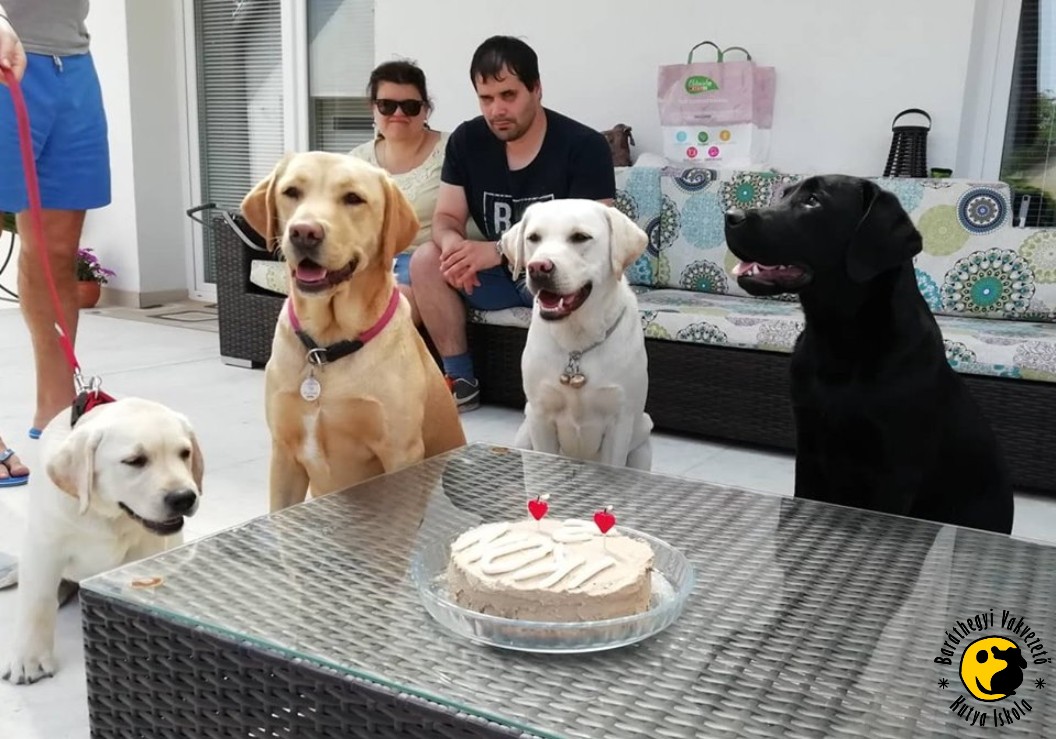 There was a great bustle at our puppy raiser, Marika Szűcs when she was visited by her first raised dog. The dog did it for a good reason because he was invited for a birthday party. Ikon got a birthday cake which was eaten by him, by his „colleague” and by enthusiastic guide dog pupils. We thank Ikon’s owner, Sándor and his partner Viki, for bringing Ikon to this great program organized by Marika.

Firstly, our puppy raisers Andrea Sápi and Réka arrived at the birthday party with the experienced guide dog, Fidzsi and with the enthusiastic guide dog pupil, Müzli. Soon, Ikon, the celebrity also arrived at this important event together with his owner Sándor and his partner Viki.

Artúr, as a host, was entertaining Fidzsi and Müzli until Ikon arrived. Artúr played a lot especially with Müzli. Marika was very excited when waiting for the celebrity because she hasn’t met Ikon for a long time, and she has just met Ikon’s owners in the flesh. “Mommy looked at her „puppy” stunned as Ikon really became a model of obedience,” as Arthur remembers in his diary.

Ikon and Fidzsi played as two mature adults while Artúr and Müzli could play tag, fight and run until they dropped. „When Ikon’s birthday cake arrived, the two-legged were impressed by us. Magically, we were sitting and waiting for the candle to be lit, and as always, mommy Andi sliced
​​the cake and everybody got his own slice. I confirm that the cake was very delicious, a real handicraft masterpiece. The cake was made of spelt, oatmeal and apples and it was filled with pork liver cream made by Mommy’s own hand, ”as it was dictated by Artúr into his diary.

It was a great day and everybody will remember it with great love!