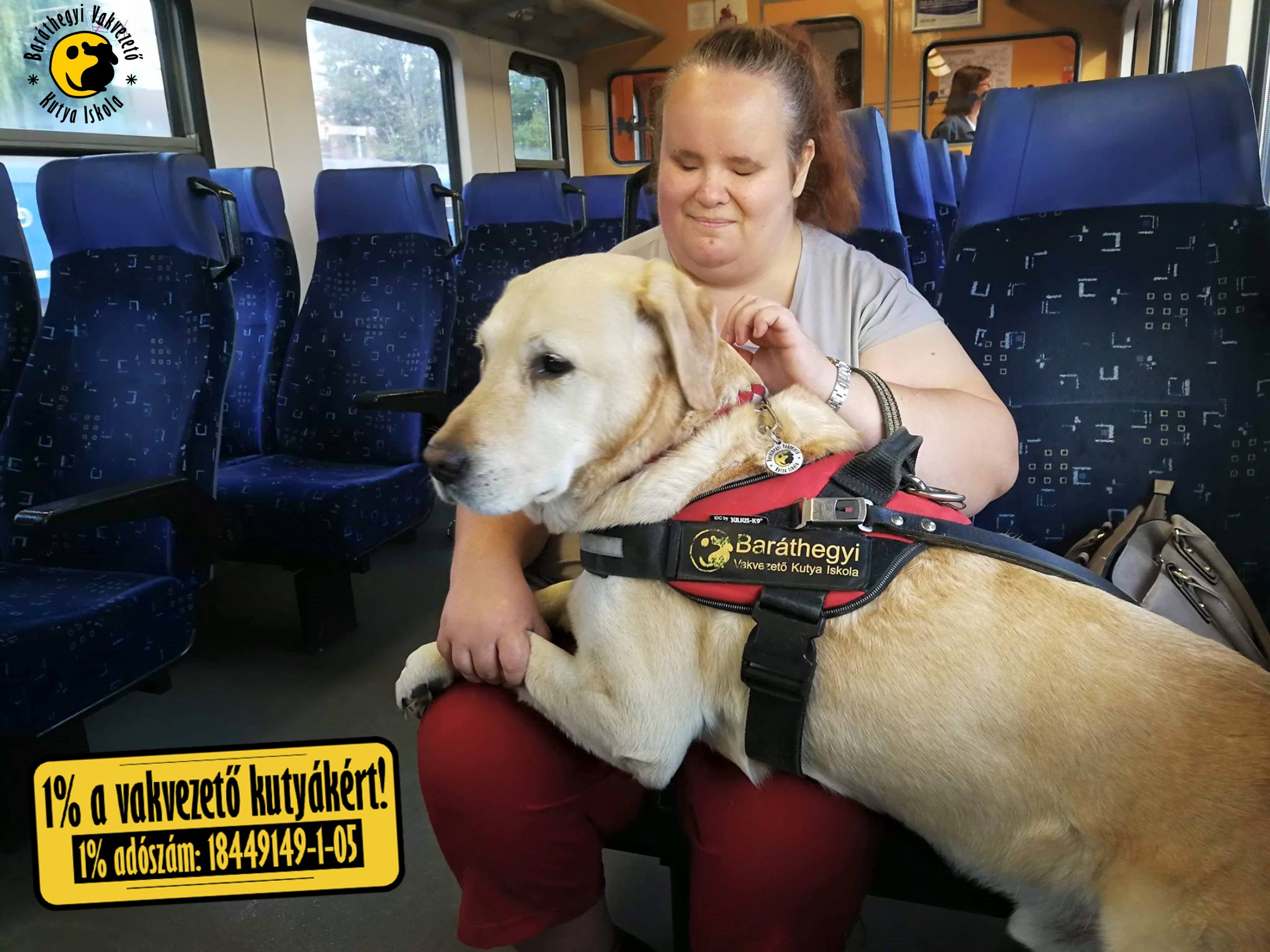 Pieces of bacon pierced with needle were scattered around the place where one of our guide dogs goes to work. Guide dogs are most at risk from such mischief because their visually impaired owners are not able to keep dogs from being tempted by lures in all situations. We summarized why this behavior is dangerous for them and how they can be protected by unblinded and visually impaired people.

In February 2020, pieces of bacon pierced with needle were scattered in Szolnok, around the office of Association of Blind and Visually impaired People of Szolnok County where Ágota Lukács is working. Her guide dog, Vacak was trained by our Foundation. „Guide dogs are most at risk from such mischief because their visually impaired owners are not always able to keep dogs from eating such foods”- said Piroska Komondi, the professional leader of Baráthegyi Guide Dog School.

Guide dogs working in harness are taught not to eat anything from the ground and not to accept any food from strangers while working, but they are not machines, they may have a weaker moment when they follow their instincts.

We know from visually impaired owners, that they usually manage to prevent eating of forbidden snacks, when they feel that the dog is keenly interested in something, but everyone has bad experiences with strangers feeding the dogs without prior permission from the owner, and they also found food residue carelessly scattered on the ground. It is so common that it can happen with a guide dog several times a week.

However it sounds very bad, but guide dogs are most at risk when they have rest. „The guide dogs are almost totally defenceless during their running time. It is not surprising that labradors – which are fond of good living –, eat something from the ground during this time. Our dogs have their well-deserved rest without harness and without control of the owner. Additionally, they are without muzzle as guide dogs are not required to wear it even during their work” – said Piroska Komondi.

Playing fetch, unblinded helpers and muzzle
Ágota Lukács, the owner of Vacak recommended a solution for both owners of guide dogs and hobby dogs, and this solution is also supported by our Foundation: „playing fetch can be a good solution for dogs, non-dependent on foods, I prefer to do this with Vacak. He rather focuses on playing and doing his job, he doesn’t slip away and doesn’t look for a food because he knows that if he does this, I will not throw his toy again and he will not be able to run for it and to bring it.”

Ágota Lukács came to the conclusion that as a final solution, she will put a muzzle on Vacak only in case of saving his life: Our dog, our responsibility and however guide dogs are not required to wear a muzzle but in such places we should put it on them in order to ensure their safety. Our professional leader agreed with Ágota regarding the question of responsibility, we don’t want to interfere with owners’ decision, but she also added that it is an emergency solution: guide dog job is a real job, these dogs work a lot and they need for playing, moving actively, and muzzle does not fit in with this. In particular, we are talking about gentle dogs which are exempted by laws to wear muzzle and it will disturb them during their rest – said Piroska Komondi.

Our professional leader highlighted that the role of unblinded helpers is also important. Even without knowing the visually impaired person, they can warn him to take care of his dog at the given area.