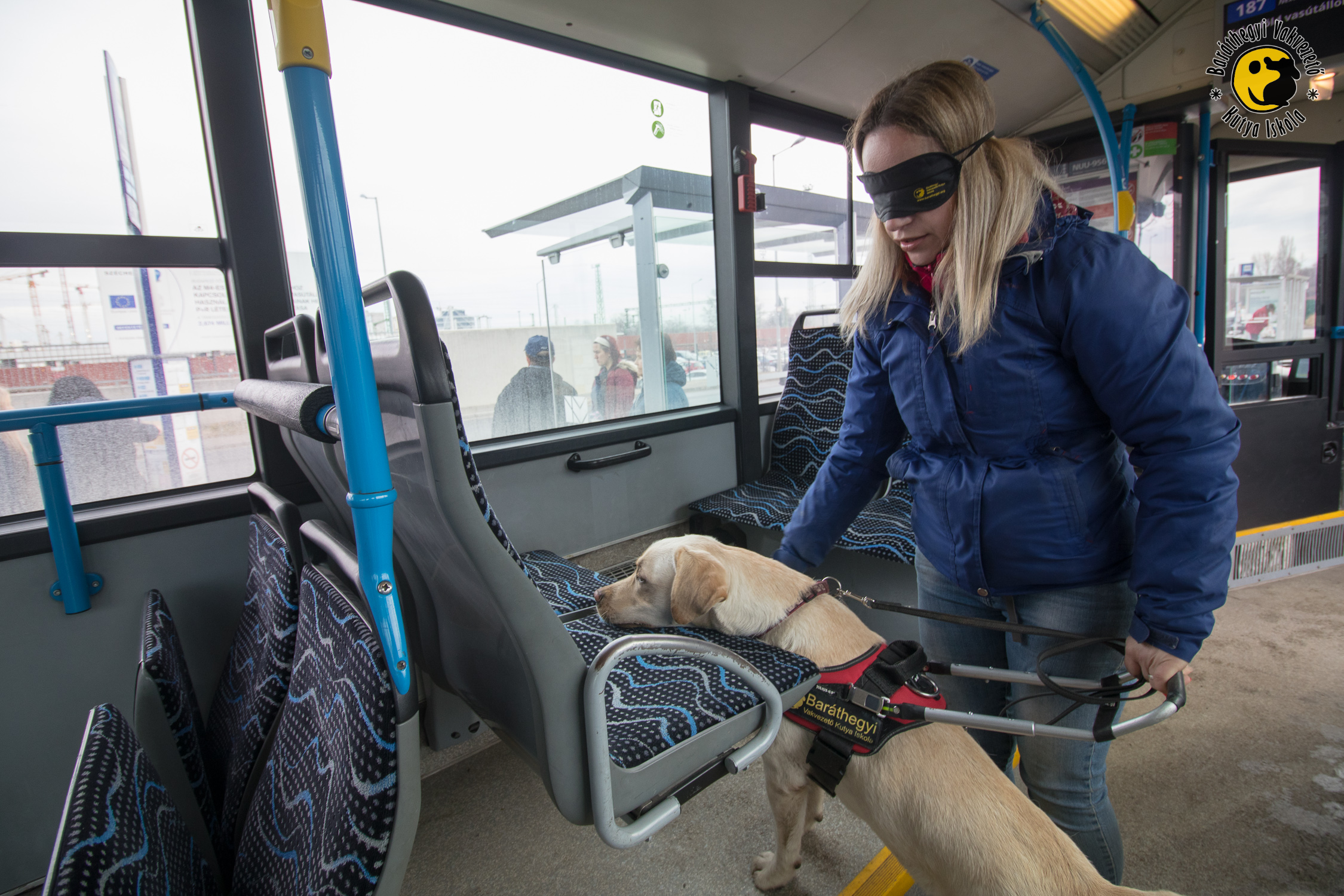 Iram enjoys life and doesn’t want to be left out of anything. His trainer would like to include the yellow Labrador’s readiness of action into the guide dog training and use it to help. The first trainer of Iram passed away tragically, which was a traumatic experience for everyone. Since then, our experienced trainer volunteered to continue the training of Iram. We talked with Emese Barkóczi Királyné, guide dog trainer of Baráthegyi Guide Dog School.

How long is it since Iram started the training?
Since October. He will be one and a half years old soon.

What type of dog is he?
Iram is quite temperamental, human centred and searches the company of people. He enjoys life and wants to be everywhere. He is unbelievably lovely, happy, cooperative, loves to work and late maturing type.

How long is his training?
Until he learns the tricks of this responsible “profession”. A few months more is surely needed.

What does he know now and what he still has to learn?
Based on his general behaviour that is easily manageable and obedient, we could already start training him to socialize with the city. His attention is still and well-balanced and he can concentrate on his task. First, he had to learn the start and stop signs so that he would step down from the pavement when he gets the permission. The dog doesn’t recognize if the lamp is green or red but searches the crossing and helps getting there without colliding with other pedestrians on the way. We already started harness work and finding objects such as bus stops, seats, stairs, doors and exits.

How does a regular workday look like?
There are three dogs under training at me. First, I run them, then we go to the training centre where I train on an appropriate level with each dog.

Are there any dogs that cannot be trained?
It happens. This can also be a health issue that wasn’t discovered before. I had dogs, who had minimal doubt in themselves and the bigger the stress became the more doubtful they became. A guide dog’s responsibility is great, it is their task to watch the visually impaired owner’s every step. I think that in this situation the dog could not process the weight of his responsibility, so we agreed to find him a more suitable future.

What happens to these dogs?
We find them a family where they can live a happy life.

You have four dogs and two in training. How does Iram cope with the other dogs?
Iram loves every other dog unconditionally. He became friends with my own dogs, who accepted him because they are used to having trainee dogs in the family. It is rather exciting to see when a new trainee arrives in the middle of a training. Usually the dogs in the middle of the training become more serious. It was the same with Iram. He wanted to the younger that he is a good boy and knows many tricks. This is when you can see their pride in knowing something that the other dogs don’t know.