More traffic lights would be needed that warn visually impaired people in busy intersections with an audible signal, because without it they don’t feel safe. There are places where they step off the sidewalk in fear of their lives. It turned out form a survey of Baráthegyi Guide Dog School that according to the respondents, “speaking” traffic lights are missing around municipalities, hospitals and surgeries.

Baráthegyi Guide Dog School prepared for International Guide Dogs Day on April 27 to draw attention to the traffic light controlled crossings in Budapest and rural cities, where visually impaired people do not feel safe before stepping off the sidewalk.

Several of the respondents who participated in the survey rather avoid the dangerous crossings. It is characteristic that there is no audible signal at these crossings or does not work properly.

Lights producing an audible signal also help visually impaired people who have a guide dog. Those who walk with the help of  a white cane or a guide dog rely primarily on sounds, when crossing the pedestrian crossings of busy roads, so more traffic lights are needed that produce an audible signal to warn when it is possible and when it is forbidden to cross the road.

According to the participants of the survey of Baráthegyi Guide Dog School it is of extreme importance to have audible signals at multilane pedestrian crossings and where there is also tram track. In addition to busy intersections, audible signal is necessary at the zebra crossings near municipalities, hospitals and surgeries, because as everyone else, visually impaired people go to these places on a regular basis. 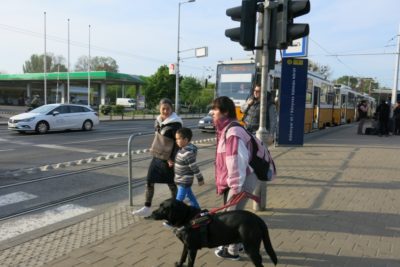 At several busy intersections sound device is not built in traffic lights, as respondents from Budapest, Eger, Miskolc, Szeged and Székesfehérvár pointed out. It is difficult to orientate, when one has to cross a tram line and even several adjacent lanes, so there are crossings that visually impaired people fear and rather avoid them.

There are several such crossings: at the dangerous intersection of Ecseri Street and Üllői Street, the arrival of the tram is not signaled with sound, another respondent – in the absence of a sound signal – does not date to cross the road at the underpass of Erzsébet királyné Street from the stop of tram No. 3. At Trinitárius Street at Eszterházy Square in Eger several visually impaired people avoid the pedestrian crossing. Széll Kálmán Square, Bosnyák Square and Kosztolányi Dezső Square, where trams are running, are also “dumb”. At the intersection of Nagy Kálmán and Bajcsy-Zsilinszky Endre Streets in Miskolc trams are running, but the traffic lights do not produce an audible signal. It makes the life of a respondent in Szeged difficult that there is only zebra crossing and no traffic light where Vitéz Street crosses Boldogasszony Avenue and Szentháromság Street.

There are also technical problems: there is audible sound but it does not work at a part of the intersection of Kőbányai Street and Könyves Kálmán Boulevard in Budapest. At other crossings the sound is so quiet that you cannot hear it from the noise of the traffic. For example, such crossings are one in Ecseri Street in Budapest and another one at Árkád Shopping Center in Győr.

There is a remote control with which visually impaired people are able to sound traffic light and escalators that produce an audible signal; however, it is common that upon pressing the button of the remote control not the intended light produces sound, but another one nearby. In fact, it is also common that upon a single button press, several lights produce an audible signal at the same time (for example, at Zsigmond Square in District 2 in Budapest) and even the Courier of the Center for Budapest Transport also chops in. It is specifically annoying at the intersection of Thököly Road and Hungária Boulevard that upon a single press of the button, both the bus and the tram information start.

All this is disturbing and dangerous, as signals are coming from several directions before crossing the road and it should be decided in seconds which one to listen to.

In relation to the “speaking” traffic lights in many cases the visually impaired themselves turn to the institutions responsible for urban public transport. The survey found that in Kaposvár a traffic light was installed with an audible signal upon public reporting, while respondents in Miskolc and Budapest reported that they did not manage to effect changes.

Baráthegyi Guide Dog School will inform the competent institutions in the cities concerned about the deficiencies the survey found.