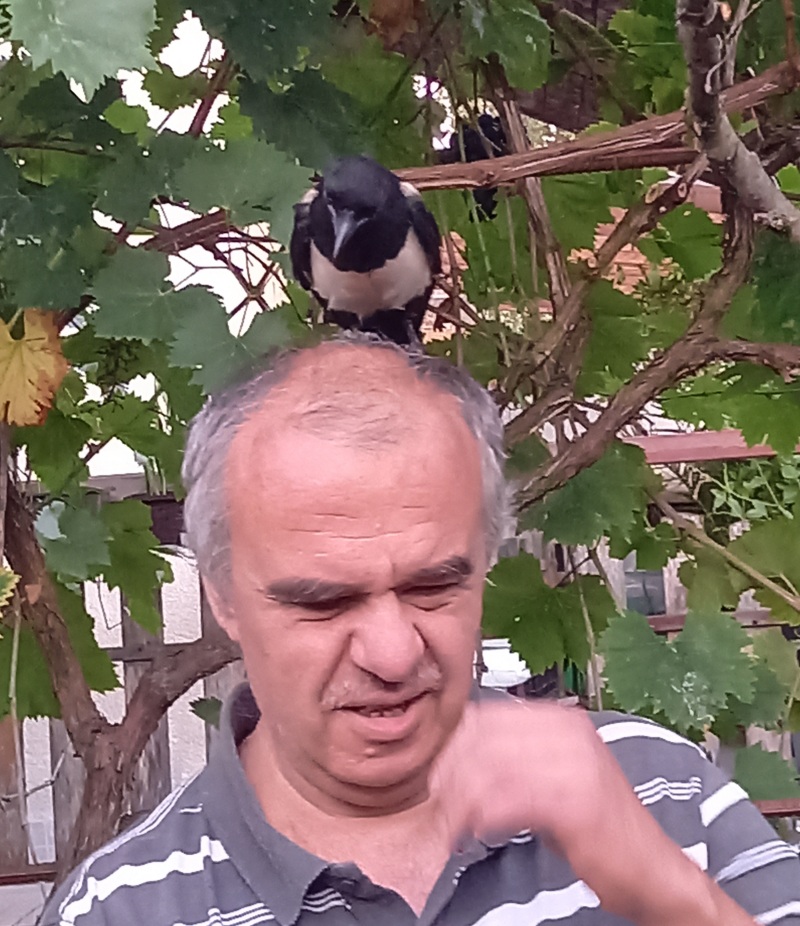 Rossini, the magpie, visits László and his guide dog, Marzipan, daily. Their friendship began with a common interest in eating grapes, and today it is to his garden that the bird comes, flies over his head, and where it hides its treasures.

“When the grapes ripen in my garden, a lot of birds and insects come there.  It happened that while I was eating the bunch in my hand, someone else also started eating the grapes I had”.  It was him.  In other words, „the contact started on the part of the magpie, who then visited me every day for two weeks”, said the gardener and engineer László Bábel.

The magpie nests nearby and pays daily visits to László, who lives in Szigetszentmiklós, and to several of his neighbors.  They quickly became friends, the magpie becoming like a family member.  It flies over László’s hands, knees, shoulders, back, and even his head.  It takes seeds, grapes and sometimes meat from his hands, as magpies are omnivorous.  Each time he starts talking to him, he ventures 20-30 inches close to Marzipan, the guide dog.  László received his faithful companion, Marzipan from our foundation, which is why he surprised us with these special photos: 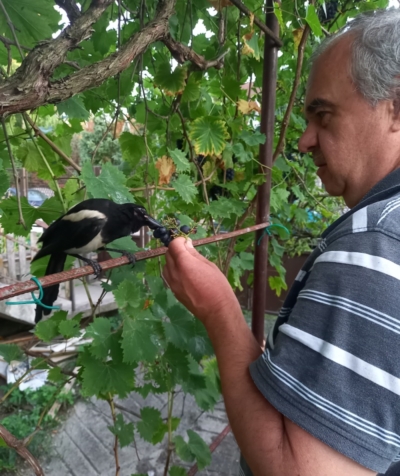 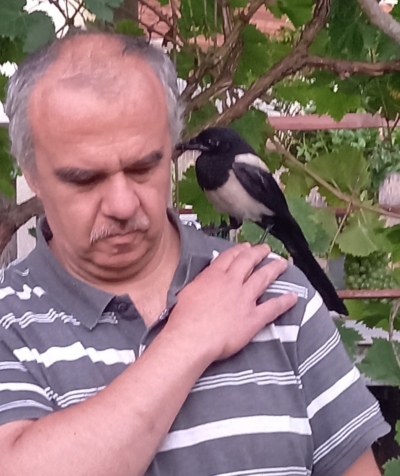 It all started here

“Animals love Laci Babel, the blind gardener-engineer.  Not only does Marzipan, the guide dog, listen attentively, but the magpie who has moved into his garden cannot resist his voice either”, explained Dr Tamás Mezősi, chairman of the board of trustees of our foundation.  The expert added that Marzipan had excelled in “natural knowledge”, as during the training guide dogs are taught to be friendly with everyone, including animals, to avoid unpleasant situations for owners.

“Sometimes he tried to hide one of his treasures under my t-shirt, flying through the open door with a piece of wire in his beak.  Of course, he wouldn’t be a magpie if he didn’t make a lot of noise and steal things.  He tried to steal a sandal he couldn’t lift, but he picked up a loose button.  I named him Rossini after the author of the highly successful opera “The Thief’s Magpie,” László said with affection in his voice.

“He also often knocks the top of my head, which I let him do, but when he stuck his beak in my ear and even started pinching my earlobe, I raised my index finger and told him that friendship has its limits.  For this, he caught the end of my finger with his beak and, indignantly, crossed over to my other side”, said László, who is a connoisseur and friend of nature with a smile.

“There was one time when Rossini woke me up.  In the morning I woke up to the sound of his rattling call approaching.  In a dream, I heard him land on the roof and asked, “Have you arrived?”  The next moment he came in through the window and got on my bed.  He walked over to me and stopped to “chat” close to my face.”

I shouted to my sister that her friend was here and looking for her.  Heni stopped in amazement at the door of my room.  She asked, „did the magpie just come in through the window?”  As soon as he saw my sister, he flew over to her and walked past her through the apartment.  He waited for her to let him out onto the balcony.  He traveled through the apartment as if he were an everyday guest.  The magpie’s morning visit certainly got me out of bed!”

At the man’s call, Rossini comes over when he’s within earshot.  As László cannot manage a realistic imitation of the magpie rattle, the “CCCCC” sound that he makes became the conventional call sign.  There are times when Rossini stays with him for an hour, other times he just jumps in for a few minutes.  When he attended a family event, he became friends with relatives, people previously unknown to him, by the end of the day.  László is happy with Rossini’s company and hopes that their friendship will last a long time.