This year the deadline for the competitors to give in their pumpkin-creations was midnight, 31st October. We are proud to say that many of you became inspired by our calling. Really, a wickedly great number of you! 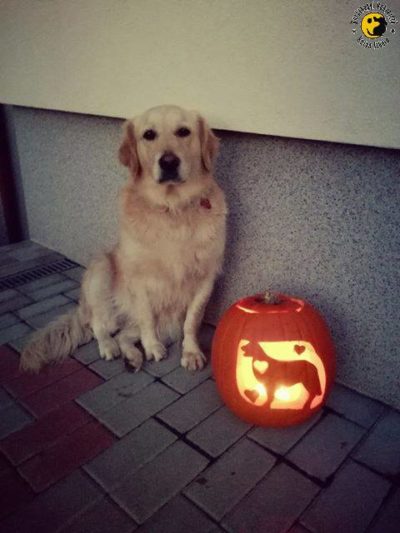 The task was not less than making real (pumpkin) statues representing your best-loved pets, or, like last year, carving out our school’s logo.  For the jury, it was hard to choose from the masterpieces, and was happy to see how much inspiration is given by your pets, from labradors through a terrier to a hairless cat (yes, lest to forget about cats!).

The story of pumpkin-carving

„Jack-o’-lanterns”, the carved pumpkin lanterns, are coming from the 17th century England. At the end of the 1800s this was the name of those lanterns carved out from carrots children were carrying round from house to house while asking for “soul cakes” on All Saint’s Day (or Halloween on 1st November) and on the Day of the Dead (2nd November). This was for the commemoration of the dead. According to the legend, the name of the lantern is coming from a drunken, Irish sailor, Stingy Jack. Supposedly Stingy Jack made a bargain with the Devil not to blast his sinful soul to hell after his death. But when his moment had come at last, he wasn’t taken in to heaven either. So the Devil gave him a piece of coal that was put into a turnip as a lantern. So since then, the soul of Stingy Jack is looking for peace by the light of this lantern. Later the tradition was brought to North-America by Irish immigrants, where the more attainable pumpkin has been used for this purpose that is also easier to carve. By the 19th century the tradition of carving pumpkin lanterns was spread all over the continent.

However it is not so well-known that carving pumpkins is an old tradition in Hungary also. According to the tradition, in 1081 king Solomon was fighting for the throne with László. Though he accepted László as the Hungarian king and let him keep his royal title, Solomon continued planning to get on to throne. So László locked him into the tower of the castle of Visegrád. He ordered the guards to light the tower with pumpkin lanterns after twilight, so eyes can be kept on Solomon at night as well. The lanterns   illuminated the River Danube too, so the tower became a point of reference for the shipmen. This is where our saying comes from: “shining like the pumpkin of Solomon”. There is no data about when and how the tradition of carving pumpkin lanterns took shape in Hungarian language area, but 100 years ago it was already a tradition in Transylvania to carve pumpkins and light with them in cemeteries on the Day of the Dead.

Every participant of our competition got a present; now let’s introduce the awarded works.

Német Ágnes won the first prize for her sophisticated works of art.

Carving Halloween pumpkins is a tradition in every year at Ágnes’s. She wrote about it to us: “This year your competition gave the inspiration on to my motives. On one of the pumpkins is Lora, my 5 year-old golden retriever who is a practicing therapy dog, adoring children and adults as well.  Sometimes she comes with me to the school to work; he really loves the hustle and bustle there. On the other picture you can see our cat, Pici, who is a 3 years old, beany little girl.” 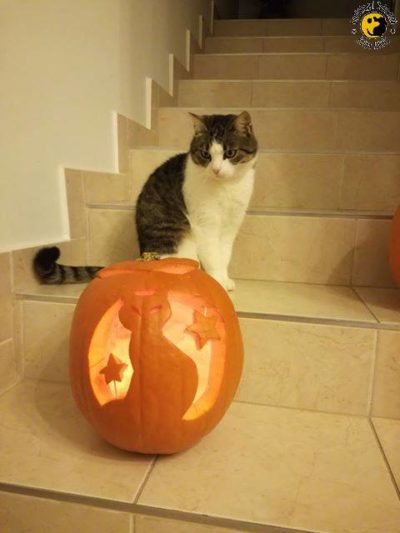 It is a wonderful scene at night: a lightening portrait of a dog. 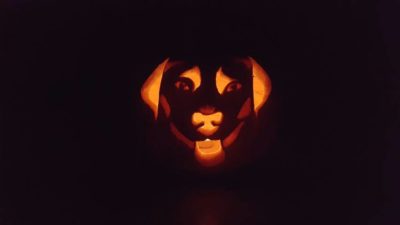 The silhouette of Áfonya as Luca, her owner sees her.

Have you ever seen a waving Labrador?  Luca carved his own dog into a pumpkin and wrote this message to us: “I love dogs, my favourite breed is Labrador. Áfonya is a 9 years old Labrador and I think I could carve her quite well.” Look at the nice work of the 8 years old Luca! Her reward was a drawing package in a wooden box and many Baráthegyi treasures. 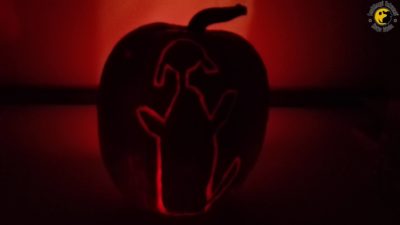 Congratulations to the participants!