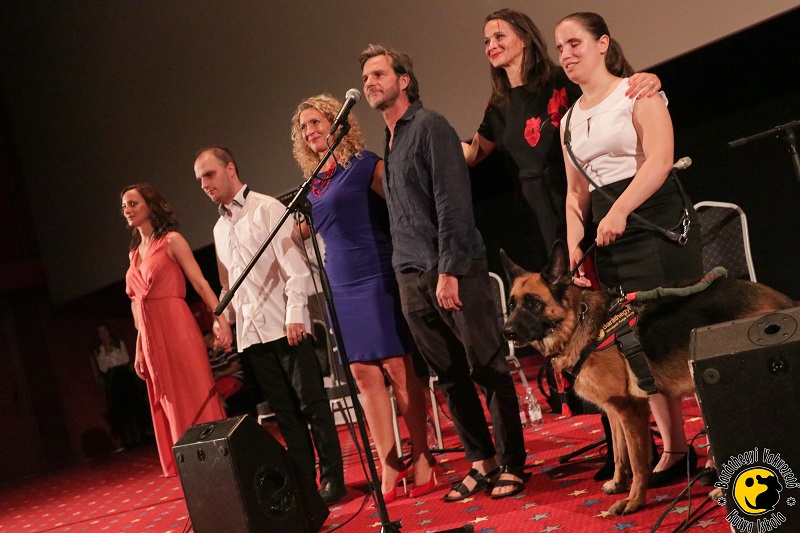 Dandzsi, the German Shepherd, is an experienced guide dog and will soon be 7 years old. He arrived from Germany in July 2019, shortly after his master died. Kardon Annamari was already looking forward to being with her faithful companion and taking her home from Miskolc, where the staff of the Baráthegyi Guide Dog School dealt with the dog. Since then, they have also performed with Ági Szalóki and other famous musicians, as Annamari and her partner play the piano at a high standard.

They lived through a difficult period with last year:

“My dad teaches German students, a disciple approached him to offer us the guide dog of his deceased father. When he came to Hungary, Dandzsi mourned his master, barely eating at first. I visited Miskolc several times to get to know him. The staff of the Baráthegyi Guide Dog School did important work here, assessed their health, and watched the blind guide work, ”said Kardon Annamari of Dandzsi, who has been taking care of her footsteps for 9 months.

“We have the best place for her”

The fall was about Annamari having to win the dog’s trust, which was hampered by her owner’s death and the fact that she had moved to a new country. At the end of September, the turning point was when they spent three days together, at which point Dandzsi began to open.

“At first I was unsure if he would love me as his former master. Then I recently sent photos of ourselves to the wife of the former farmer, who replied that she sees her as very happy and has the best place with us, ”Annamari said proudly.

The trainers of the Baráthegy Guide Dog School showed a lot of new things to Dandzsi. First, they had to get in shape, since he hadn’t worked for half a year. Then he had to adapt to the new circumstances because there are tasks that are taught differently in Germany than the Baráthegyi Guide Dog School at home: e.g. the guide dogs there indicate the rain stops of the vehicle stops, while in our case the stop signs. The other example is that there are a lot of guide lanes in Germany, so Danji had time to learn that there could be a zebra in its new place where there is no guide lane for the visually impaired.

“Dandzsi has a hard time getting used to being in the big city because his former residence was a quiet small town, but he has already shaken into the rhythm of big city traffic and is driving perfectly well,” Annamari said.

Annamaria’s partner, Maximilian, had a strange time living with the new family member because he used to have a garden dog, but then the world changed a lot with him.

Maxi is now saying that she misses Dandzsi so much when we are at school that she needs a plush dog that she can caress until we get home. The Baráthegyi Guide Dog School found out about this and gave Max a plush dog, which we laughed at a lot, ”says Annamari, who is studying French at ELTE, laughing.

Next to Dandzsi, it’s easy to hit next to the key

“There are dogs who are sensitive to certain sounds, but music is generally well tolerated and, in fact, they can recognize melodies, e.g. phone ringtone, doorbell. This ability can also be used in training. We were at concerts several times with guide dogs who specifically dated the music. On one occasion, when we walked out of the hall with eight guide dogs in eight harnesses, we were amazed by the audience, because many did not notice that the dogs were there, ”said Piroska Komondi, the professional head of the Baráthegy Guide Dog School.

When Dandzsi first heard Annamari and Maxit play four hands on the piano, they were in the same room and were found in front of the closed door, which did not turn out to be a great music lover.

“It doesn’t bother me anymore, we can sing, play the piano, whatever music it runs through. In fact, he often pushes my hand with his nose while playing, in which case there’s instant fun. When I first played the electronic piano with earphones, my dog couldn’t hear me, he just saw my fingers sledging on the keyboard, it made me a little upset, ran, inquired, again signalling with my hand that something wasn’t going well here. Then I showed him what it was about, and then he calmed down. It may even happen that he is slowly becoming a musician next to us, ”Annamari said with a smile.

Kardon Annamari and Helle Maximilian, who form a party in life and at the piano, performed at the first post-quarantine concert of the Tibor Bodor Cultural Association on Wednesday. At the performance “The Concert in the Blind Dark – piano and vocals without lights”, Ági Szalóki and Juci Németh and László Kollár-Klemencz, well known from the Budapest Bar, were shown on a stage what a special experience it is to experience music without lights.

Alongside Annamari, Danji was lying all the way through the concert, and he was very proud of it: “He did well in today’s concert, it’s hard to shock him. When something new happens, he is amazed, but soon calms down. If I’m there next to him, he can stand anything. ”

Ági Szalóki, the performer of the Concert in the Blind Dark, said how deep and tense it is to turn off the comfort zone when the lights are turned off at the beginning of the concert, and at the same time forge closer contact with visually impaired people. He is delighted that the audience has been able to experience this and highlighted the importance of visually impaired musicians being on stage as well.

What kind of dog is Dandzsi?

He starts each game with a bark, “talkative,” which his master especially likes, especially the soft whines. She loves other dogs very much. Annamari walks her every 4 hours, loves to chase in the runners, and when she has had enough of her, she lies down at her master’s feet.
“He’s my first dog. It means a lot to me emotionally. Next to it, I learned to be myself, I learned patience and perseverance from him. How does this manifest itself? He had days in the beginning when he had a hard time getting started. It took a long time to persuade. I was patient with him because everything was new to him here. Since then, it has been easier to put down my temper if e.g. someone is puzzled by me. “You became responsible once and for all for what you tamed,” this quote from the Little Prince is true for the two of us, ”Annamari said.
Share it with others!