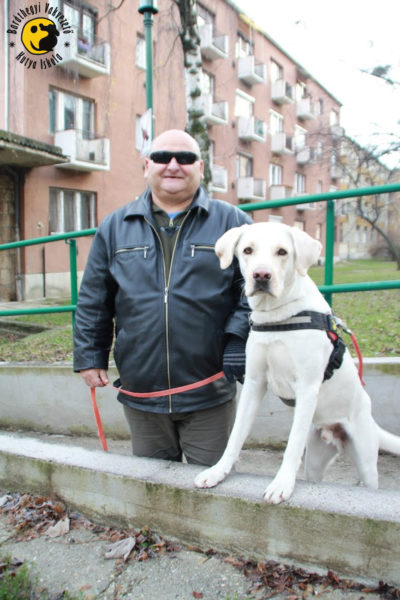 After a dog attack on Friday, a golden labrador from the Baráthegyi Guide Dog School had
to be operated on. Unfortunately, an amputation was necessary, but Gyömbér is now
feeling better.

A dog attacked Gyömbér and his owner, Barnabas Kiss, in Abaújszántó. Barnabas was on his
way to work when a dog that had escaped from a nearby garden attacked him and his guide dog.

Barnabas fell, and the golden labrador suffered an injury from the wild dog that resulted in the
end of his tail needing to be amputated. Both dog and owner were heartbroken by the attack.
They needed to recover for a week or so and are currently at home in Tornyosnémeti on
sickleave.

They were on their way to Barnabas’ work in Abaújszántó on the morning of February 19, when a dog charged through an open gate near to the plant. “I only noticed it when he was already very close to us. He didn’t bark, I could only heard his growl and feel Gyömbér stand in front of me. My dog seemed to have stood on his hind paws and I slipped, the harness and leash fell out of my hand. Gyömbér ran, I could hear his whining from a distance, the German shepherd must have caught him, ” Barnabas said.

Fortunately Barnabas was not seriously injured, but he felt vulnerable as he couldn’t help
Gyömbér. Some of his colleagues saw the attack from their windows and so they immediately
shouted and ran out, trying to scare the ferocious dog away from the two.

„After I called Gyömbér to my side and we went into the plant, my colleagues said that my dog
was bleeding. They quickly called a vet and the police. The skin was torn 3 cm long from the end of the Gyömbér’s tail, and the bone was visible, so the injured part had to be amputated”

On Friday afternoon, Gyömbér recovered from the anesthesia and has been resting next to his
owner ever since. They will have to go back for a veterinary checkup after 12 days. The owner of the attacking dog has assured Barnabas that he would pay for all the medical expenses.
Barnabas and our foundation acknowledge the help, but we consider it highly important to inform the public about this attack, as endangering the physical safety of a guide dog and its owner must be condemned and prevented. So far, our foundation has never had such a case, and we hope it will not happen again.

We wish Gyömbér a quick recovery, and that he and Barnabas can rest peacefully.